MotoGP has started its final triple-header of the reshaped 2020 season at Valencia with the European Grand Prix. Here’s how to watch qualifying.

Jack Miller took a clean sweep of top spots across Friday practice ahead of the European GP, with the Pramac Ducati rider continuing to impress in both wet and mixed conditions.

After a very wet FP1, the afternoon session provided more representative running albeit in mixed conditions with the Australian leading the session by 0.092 seconds from Aprilia’s Aleix Espargaro.

But the MotoGP paddock’s main talking points centred around Yamaha. The Japanese manufacturer is in the spotlight for multiple reasons, having been slapped with a heavy points deduction in both the teams’ and constructors’ championship for running illegal engines at the Spanish GP.

Crucially, the penalties did not include the riders’ points meaning Maverick Vinales, Fabio Quartararo and Franco Morbidelli remain in the world title fight – but Vinales’s task has been made much trickier after needing to take a sixth fresh engine this year, which means he must start the first Valencia race from the pitlane.

On the opposite side of the factory Yamaha garage, Vinales was joined by Garrett Gerloff for Friday practice after Valentino Rossi was unable to take part following a positive COVID-19 test on Tuesday.

The Italian retested on Thursday and provided a negative test, meaning he could travel to Valencia, but needed two negative tests before being allowed into the paddock.

Rossi has since provided the second negative COVID-19 test and will return to action from Saturday’s FP3 session.

Elsewhere, Iker Lecuona has been ruled out of the European GP for Tech3 as he is forced to quarantine in Andorra after his brother tested positive for COVID-19.

Stefan Bradl continues to stand-in for Marc Marquez at Repsol Honda after the team confirmed the Spaniard would not be returning to action this weekend as he recovers from a broken arm. 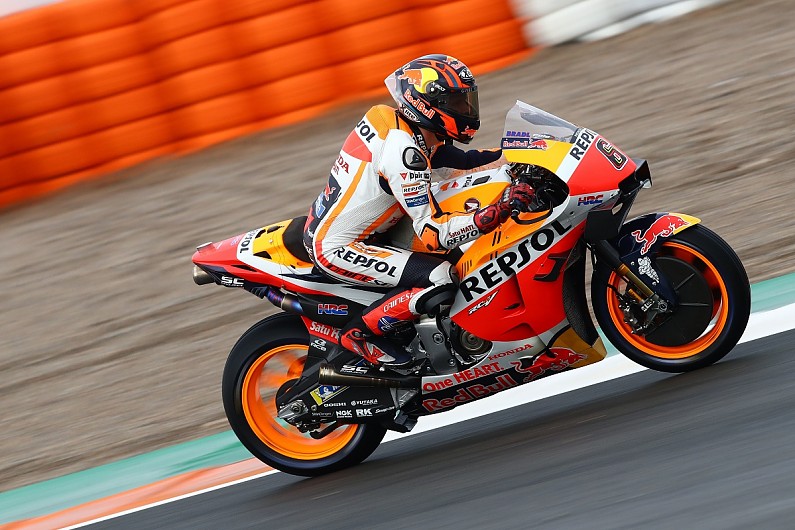 Why is the European GP being held at Valencia?

The ‘new’ races on the redrawn 2020 MotoGP calendar have all been part of double-headers at the same circuit (Andalusia GP at Jerez, Styrian GP at the Red Bull Ring, Emilia Romagna GP at Misano and Teruel GP at Aragon) – while the finale in Portugal is a new addition completely.

The Valencia double-header follows a different naming format to the previous back to back races this year, with its opening grand prix called the European GP before the second race takes its traditional Valencia GP title.

This is because all key region names have already been taken on the shaken-up 2020 calendar. It means the European GP race title has been reintroduced to the series for the first time since 1995 when it was used for the Circuit de Barcelona-Catalunya race.

What time does qualifying start for the European MotoGP?

The fastest 10 MotoGP riders on the FP1-2-3 combined timesheet automatically head into Q2, with the rest of the riders entering Q1 of qualifying. The two riders who are fastest in the 15-minute Q1 session will progress into Q2 to compete with the top 10 from practice. Q2, which also lasts 15 minutes, decides who gets pole position and the qualifying order for the front four rows of the grid.

In the United Kingdom, every MotoGP practice, qualifying and race is broadcast live on BT Sport. MotoGP also offers its own live online video streaming service.

What’s the weather forecast for qualifying at Valencia?

Dry and sunny conditions are forecast for qualifying at Valencia, with a very low chance of rain – but heavy rain is forecast overnight across the region. A high of 22 degrees Celsius for qualifying will mean temperatures will be roughly the same as Friday’s FP2.