MotoGP, An ‘inconsistent’ Bastianini reckons his consistency this time paid off

Some days you just need to wake up, open the window, and look at the horizon to see your dreams come true. That’s what happened today to Enea Bastianini, the new Moto2 world champion. “Last night I had a harder time than usual falling asleep. Strange for me, because I’m a good sleeper. I thought about everything, also to try to understand how to manage the race. I thought that a fourth place would have been enough. When I saw that I was there I was satisfied, and then when I saw Sam in third position I thought: OK, I don’t take any more risks. That was enough. It was not so easy to manage this last race. But I’m proud ”.

Smart and fast, two things that Bastianini used to experience this final round in Portimao and take a title with Italtrans.

“As soon as I crossed the finish line it was like a liberation, something that seemed impossible, every time I had missed out on this thing here, in the last few races I wasn’t able to be incisive, slowly, minute by minute I’m understanding what happened to me” .

From Beast to docile puppy, Enea is enjoying this moment which is also a turning-point in his career. His father Emilio and his mother Antonella are proud of him, all of Italy is.

“Celebrating is not possible – said Enea – but as soon as I return to Italy we will do it with friends and in the fan club, keeping our distance “.

What matters now is realizing the great result that Bastianini has brought home. He defines it as “a dream that becomes reality”. 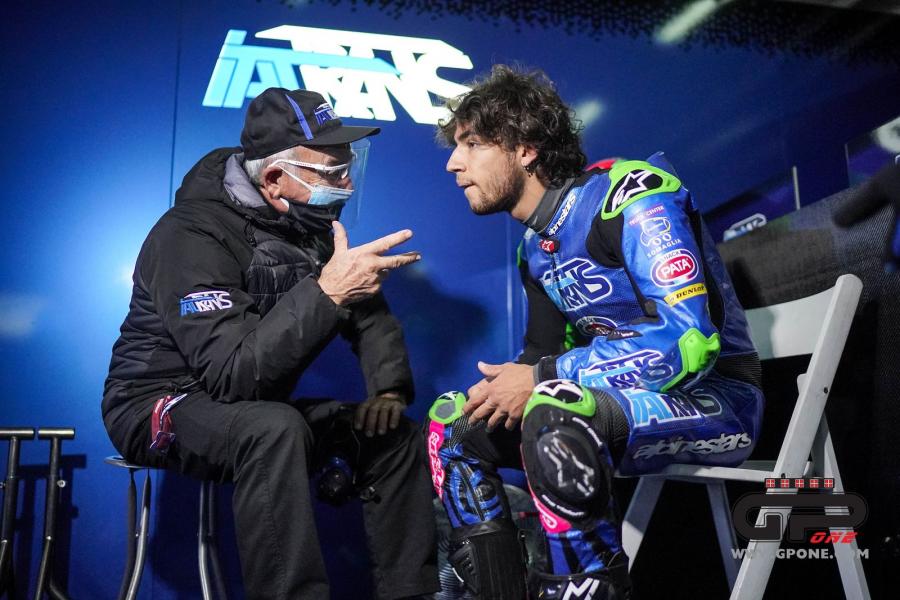 But it is even more than that. “The decisive step? It made me do a lot of things, because it’s all between the ears and I worked hard on it, above all I trained hard so as not to arrive unprepared for the first race of the season and then for the others. It was a very different championship than usual. My team and I have been better than the others at handling this thing here. I have to say thanks first of all to myself and to the people around us and also to my team “.

But what does it mean to be world champion, what changes in Bastianini’s view of things? It will all be different.

“Becoming world champion means having made a difference almost everywhere and having made fewer mistakes than others. I have always been a bit inconsistent and instead in this world championship consistency has paid off. This also makes me proud. Luca Marini and Sam Lowes were excellent opponents, difficult to beat. It was nice”.

A season that risked ending in a different way, because Bastianini suffered a bad accident in Austria. It could have been the beginning of the end, but it wasn’t.

“But in this world championship I took three victories, seven podiums, it’s the best year of my life. The work done in winter was very important for me and, apart from Austria, I always finished all the races between fourth and sixth, seventh place. Winning the world championship today was something incredible, for the first time I won the championship. It’s incredible”. There was never a moment when he thought he would not make it, “I knew a fourth place could be enough “.

“I had a fantastic feeling, the best of my life. I enjoyed the race a lot. When I saw that a lot of riders were overtaking me, I thought: I have to give more gas, push more, and in the end fifth position was good because I became world champion. My dream came true. And I want to dedicate it to everyone. To my family, my team, my girlfriend. The work of my team has been fantastic at every race, in such a short championship the most important thing was consistency and no accidents “.