Honda rookie Alex Marquez says Joan Mir’s sophomore MotoGP season in 2020 is a “really good example” for him to follow for his second year in 2021.

Suzuki rider Mir can wrap up the 2020 MotoGP title this weekend in the Valencia Grand Prix after opening up a 37-point lead in the standings with his maiden victory in the European GP last week.

In a season of irregular form for most of the grid, Mir has scored the most podiums of anyone with six on top if his win, and of the 10 races he finished he has missed out on finishing in the top five just once.

Marquez struggled on the RC213V in the opening part of the season, but a breakthrough with his bike following the post-San Marino GP test sent him on the path to back-to-back podiums at Le Mans and Aragon.

Team-mate to Mir in Moto2 at Marc VDS in 2018, Marquez praised the Suzuki rider for his 2020 form and admits it has acted as motivation for him for his second season in MotoGP.

“Well, he did a really good step, also Suzuki,” Marquez said last Sunday. “If you see the championship, it’s clear that the Suzuki bike is so complete.

“He [Mir] was smart to take that opportunity in this strange year, with less races, only European races, with the injury of Marc [Marquez].

“He takes the opportunity and [last Sunday] he did what a champion needed to do by putting everything on the table and saying, ‘I want to win this championship’.

“He took good points. So, for me it’s a really good example to keep going, to keep motivated for the future because we are seeing everything is possible in MotoGP.” 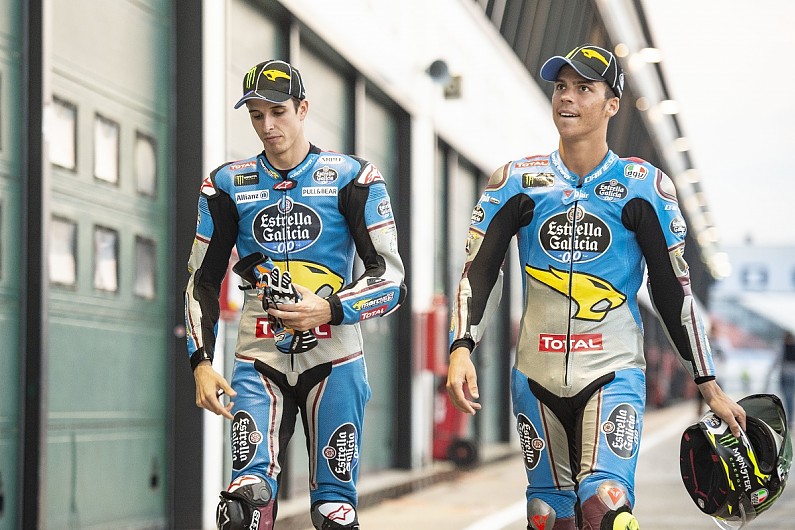 Marquez crashed out of the European GP in the latter stages having just been passed by Ducati’s Andrea Dovizioso on the run into the first corner.

This allowed KTM’s Brad Binder to steal a nine-point lead in the standings in their battle for rookie of the year honours.

Though Marquez admits his goal is to finish as top rookie in 2020, the fact his European GP crash was his second-successive race tumble annoyed him more.

“For me, it’s worse because it’s the second zero [points score] in a row and we lose a lot of opportunities to catch points in Aragon and also here,” Marquez said. “So, I’m disappointed for that.

“The objective is [to be] the rookie of the year, we lost a very good opportunity in Aragon, it escaped us here too.

“It is true that Binder came very fast from behind, but he has not escaped so much in the [points] classification and it is still more than possible [to beat him].”