European Grand Prix winner Joan Mir says he wasn’t “worried” about not securing a MotoGP victory in 2020, but admits it was “something on my mind to move”.

The Suzuki rider was the only one of the top six title contenders yet to score a victory in 2020 ahead of Sunday’s race in Valencia, though he had still managed to open up a championship lead of 14 points by virtue of his consistent podium form since August.

Mir said at previous races winning a grand prix was not vital to his title hopes, but duly got that monkey off his back on Sunday at the European GP, as he headed the first Suzuki 1-2 since 1982.

Now 37 points clear in the championship and needing to simply finish on the podium in the Valencia GP to win the title, Mir says his consistency this year has been more important than winning races.

“I was not worried but it was something on my mind that I wanted to move,” Mir said when asked by Autosport if it was important to get his first win secured.

“For sure, what was the key this season is that in some races when we were not the favourites we still have been on the podium, and when I was able to take the opportunity to take the victory, I took it today.

“In Austria [the Styrian GP], sure, maybe it was another chance but I couldn’t get it.

“It is important, the victories, for sure it is important. But in this type of season it is better to… OK, making a victory is good, but meanwhile being on the podium is also nice.” 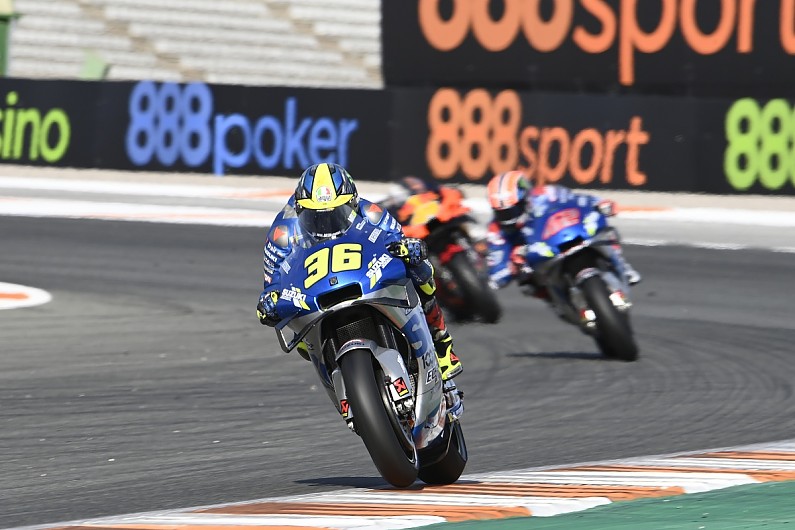 Mir says his victory was something “difficult to imagine” at the start of the season, and called his European GP the “best” of the year given the turnaround his team was able to make from struggling on Friday.

“For me this weekend was the best one of the season because it was really difficult to be competitive in all conditions and on Friday I started to struggle a little bit in wet conditions and in dry with patches [of wet] and it was a little bit difficult for me to find a good set-up,” he added.

“But then the team did an awesome job and on Saturday I changed completely, and the bike was working well in all conditions. Today in the warm-up, the first session we had in the dry, I saw that my feeling was especially good with the bike.

“I was thinking that today was maybe the day to get the victory.”

Commenting on his position in the championship, he said: “It makes me feel super good, it’s like a dream.

“I’m living a dream at the moment. Now looks like we have quite a lot of points [advantage], so we have to see.

“We have to see how I will manage the next GP because there are a lot of riders so strong. But we are strong too, so I am not worried.”