Newly-crowned Formula 1 world champion Lewis Hamilton said he “learned my lesson” from his 2007 Chinese GP pitlane faux pas in opting against a late pitstop during the Turkish GP.

Hamilton had a comfortable pitstop advantage over the second-placed Racing Point of Sergio Perez in the closing laps after pursuing a one-stop strategy, but with rain expected he was asked by Mercedes to make a ‘safety stop’ to change his balding intermediates for a fresh set.

However, Hamilton opted to overrule his team and stayed out on track to win by over 30s from Perez, clinching his record-equalling seventh world title in style.

Speaking immediately after the race, Hamilton explained that his reluctance to pit on well-worn rubber was driven by memories of the 2007 Chinese GP, when his McLaren slid wide entering the pitlane and got stuck in the gravel trap – ultimately costing him that year’s world title.

“Well you remember I lost a world championship in the pit lane,” Hamilton said.

“And I felt like I really had it under control, and the grip was getting good and I was gonna deal with the rain if it dropped.”

Hamilton had been over a pitstop behind polesitter Lance Stroll in the early stages on full wet tyres, but gradually closed on the cars ahead during the middle stage of the race on intermediates, running fifth behind Stroll, Perez, Alex Albon’s Red Bull and Sebastian Vettel’s Ferrari. 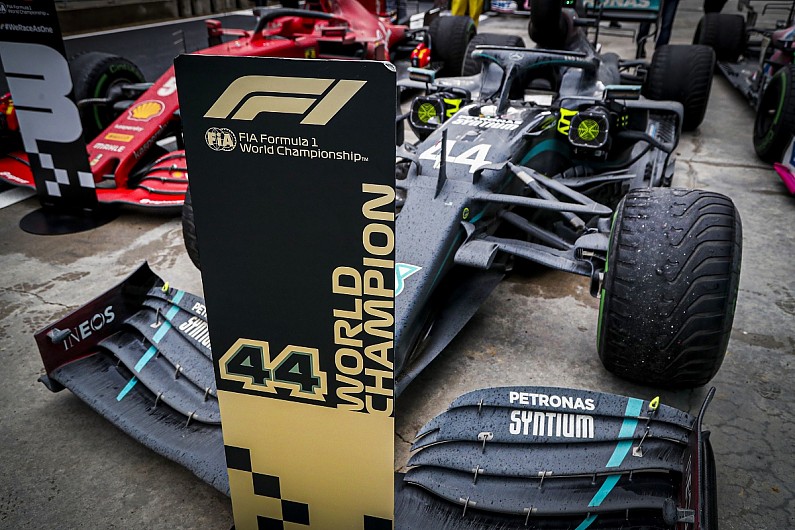 He gained places when Vettel and Stroll both came in for new intermediates, and another when Albon spun, before passing Perez and ultimately pulling away.

Hamilton explained that he knew taking a second stop for intermediate “wasn’t the right choice” and explained that the tyre’s ability to retain its temperature was crucial in allowing him to keep up a good pace.

“There was a point, obviously that Seb was pulling away from me,” Hamilton said.

“And I couldn’t figure out at the time what it was, so I was checking my temperatures.

“I didn’t know whether it was because my tires were overheating or they’re too cold, but they got to a bit of a drier patch.

“I think I went through the real rough phase of the graining of the tyre and then it started to come back, the grip started coming back.

“The track was drying in areas and I was improving my driving lines the whole way through the race.

“So then I started to pick up pace, and then Seb pitted and for me I knew that that wasn’t the right choice, personally.

“I just started to stay out and as the tyres got more and more slick, that’s exactly what you needed.

“Fortunately that intermediate tyre, it holds temperature. If I went out on new slicks, I wouldn’t have made it round but it was the best decision.”