Alex Marquez admits he ‘doesn’t expect’ to make an Aragon-style recovery through the field from 14th on the grid in Sunday’s MotoGP European Grand Prix at Valencia.

Marquez came from 11th on the grid in the Aragon GP to pressure Suzuki’s Alex Rins for the victory and ultimately finished second, and threatened a podium result in the following Teruel race from 10th before crashing out.

PLUS: How Honda has fixed a bike that only Marc Marquez could ride

The Honda rider didn’t make it out of Q1 on Saturday at the Ricardo Tormo Circuit and will start 14th behind team-mate Stefan Bradl – though his 1m41.276s was quicker than the eighth-placed time in Q2.

Because of the lack of dry running this weekend, Marquez says he doesn’t have the “information and experience” of the circuit on the RC213V to realistically aim for an Aragon-style charge through the pack.

“Tomorrow for everybody will be open because it’s dry and nobody knows which tyres to use, which set-up, [so it] can be a surprise,” Marquez said of the race.

“It can be a really good race or can be a disaster – it will be open for everybody. 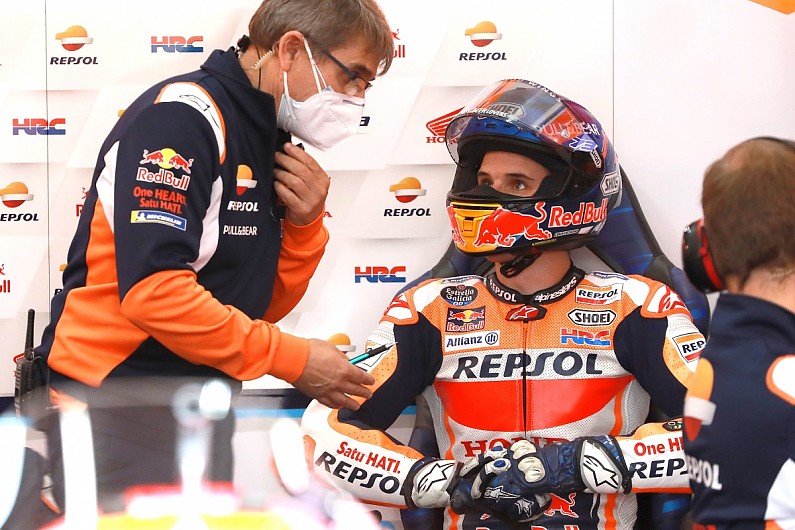 “I don’t expect to make a recovery like Aragon honestly because here the situation is completely different.

“But I will try to make a good start, to make our best race in our situation and take all the information for next week, which looks like it will be a dry weekend.”

When asked why he didn’t anticipate a similar race to Aragon, he added: “It’s hard to overtake and I don’t have the information and experience like I had in Aragon with a full dry weekend [of running].

“So, for that reason I say that I didn’t expect to make any recovery like that.

“After the warm-up we will see where we can be, where we are strong.

“Yesterday in FP2 I felt quite good on the bike, just we were missing a little bit to put soft tyres on in the end.

“The soft tyre in the front looks like it’s too soft for us and I was not able to stop the bike.

“We have some information from yesterday and we will try to do a good warm-up because the warm-up will be the key for the race.”