Moto2 championship leader Luca Marini has escaped serious injury after suffering a violent highside during FP2 for the French Grand Prix, which required him to be taken to hospital.

The Sky VR46 rider and half-brother of MotoGP legend Valentino Rossi was flung from his Kalex at La Chapelle at Turn 4 in the early stages of the second Moto2 practice session at Le Mans.

The session was red-flagged due to the debris left on track as his Marini’s bike slid through the grass downhill, with the Italian taken to the medical centre of checks.

With initial scans inconclusive on whether he’d suffered a fracture to his left ankle or not, he was transferred to a local hospital for further examination.

The VR46 team has now confirmed no fracture was detected and Marini will try to ride on Saturday, though is suffering from some pain.

Marini was one of 34 riders in the Moto3 and Moto2 on Friday to suffer a crash, with both classes supplied by Dunlop rubber as opposed to the Michelin’s used in MotoGP – with the premier class recording just four on Friday despite the tricky conditions. 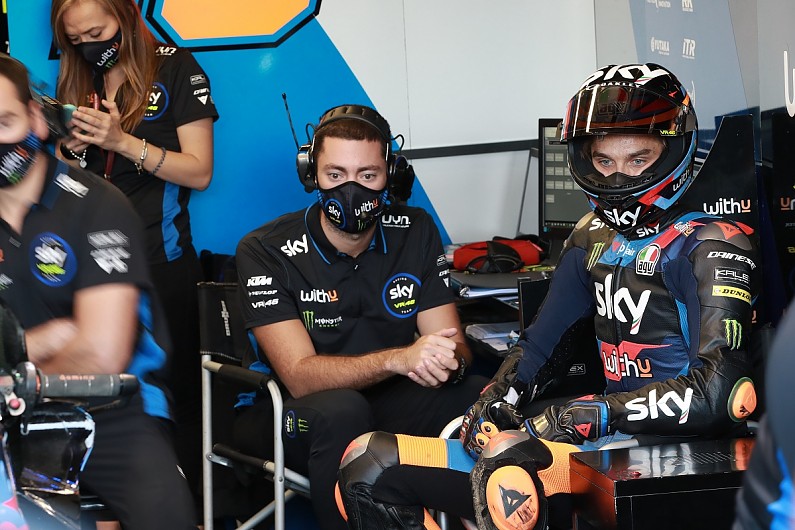 The VR46 rider currently leads the Moto2 standings by 20 points from MotoGP-bound Enea Bastianini, who is set to step up to Avintia with Ducati in place of Johann Zarco – who has signed to Pramac.

Marini has been linked with a potential move up to Avintia in 2021 in place of Tito Rabat, though the Spaniard is currently under contract for next year.

The incident for Marini comes as another twist in the 2020 Moto2 title battle, after KTM’s Jorge Martin – who will also step up to MotoGP in 2021 with Pramac – was forced to miss the Misano double-header after contracting COVID-19.

With a technical issue ruling him out of the Catalan GP, Martin’s title hopes have all but gone after dropping 71 points adrift of Marini.

Martin ended Friday’s practices at Le Mans second on the combined times, with Britain’s Jake Dixon on the Petronas Sprinta Kalex leading the way by 0.049 seconds.

Marini isn’t classified owing to the 1m45.109s he set before his FP2 crash not meeting the 107% requirements.