Alex Lynn shot to the top of the times for Mahindra Racing on the second day of Formula E pre-season testing in an afternoon session that featured a simulated race.

The Briton posted his fastest lap after the chequered flag had been waved for the three-hour run at the Circuit Ricardo Tormo in Valencia to set the best time of the day.

Behind Dennis, the Jaguar Racing attack was led by Sam Bird in fourth ahead of Edoardo Mortara’s lead Venturi and the Dragon/Penske Autosport machine of Sergio Sette Camara – who deployed the 35kW attack mode a session-highest five times.

Oliver Rowland headed the Nissan e.dams line-up for seventh place as the second Dragon of Nico Muller ran to eighth.

Muller was the classified winner of a full-length but largely unstructured simulation race.

After a morning vote, teams could opt out of completing the entire 45-minute plus one lap distance, with Rowland and team-mate Buemi having led for the early laps before pitting. 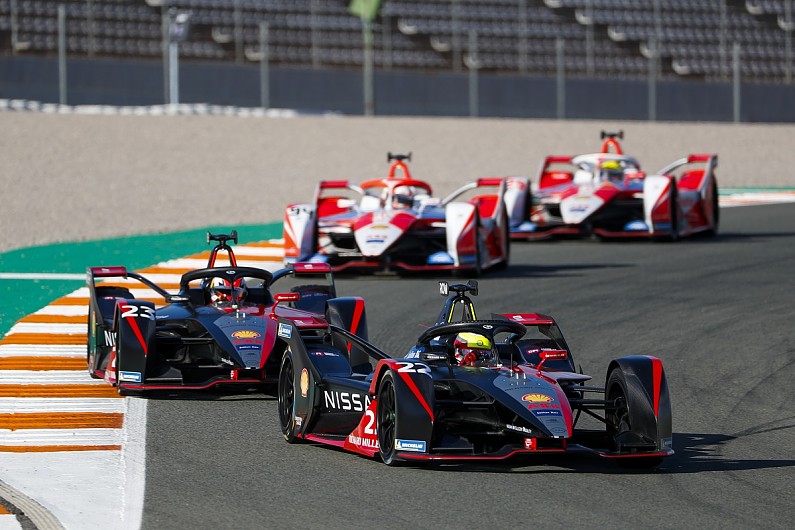 The Nissans’ initial advantage came courtesy of being the first cars to line up in the pitlane in a session that featured a full-course yellow, penalty pitstop and safety car practices.

The run-off area on the outside of the Turn 2 left-hander was used as the attack mode activation zone.

Andre Lotterer, who topped the first day of testing and finished the practice race in third behind da Costa, ended the day in ninth ahead of Venturi rookie driver Norman Nato.

Stoffel Vandoorne was the best-performing Mercedes in 11th, while the two NIO 333 cars of returning driver Tom Blomqvist and Oliver Turvey ran to 12th and 13th.

Six drivers were cautioned for track limits offences under the new restrictions brought in for 2020 at Turns 1, 6 and 10, but it was the first session of four so far not to feature a red flag.