Loeb: ’21 Dakar a “race of co-drivers” due to navigational challenges | Dakar News Sebastien Loeb believes the navigational challenges posed to the crews in the 2021 Dakar Rally has taken the emphasis away from the drivers and made it a “race of co-drivers”.

The opening week of this year’s Dakar has proved to be challenging from a navigational point of view, with even some of the most experienced drivers in the field running off course after losing their way in Saudi Arabia’s deserts.

Three-time champion and X-raid Mini driver Carlos Sainz was particularly vocal after his latest navigational drama in Stage 5, saying the event “feels more like a gymkhana than a rally” and he’s never seen so many drivers getting lost in the event before.

Loeb, who is out of contention for top honours after a week fraught with navigational errors, punctures and a broken suspension arm, believes he “cannot make the difference” in this year’s Dakar and co-drivers have a bigger say in determining the outcome of the rally.

“We need to find the right direction,” said the Bahrain Raid Xtreme driver, who is again competing with long-time navigator Daniel Elena.

“It’s quite tricky because the tracks are not really visible. We follow the tracks and we arrive to the point where the tracks disappear and there are plenty of lines going everywhere and we don’t know what to do.

“So we are turning from point to point in many rocky areas and it is no fun to drive. The times we were lost we were on a track, so it is quite difficult to understand what to do.

“I don’t want to criticise the roadbook. This is more a question for the co-driver, but honestly it may be the different terrain, but compared to the race in South America, the navigation is much more aggressive this year.

“The truth is that as a driver I cannot make the difference. I do what I’m told to do. It’s the race of co-drivers, not the race of drivers”. 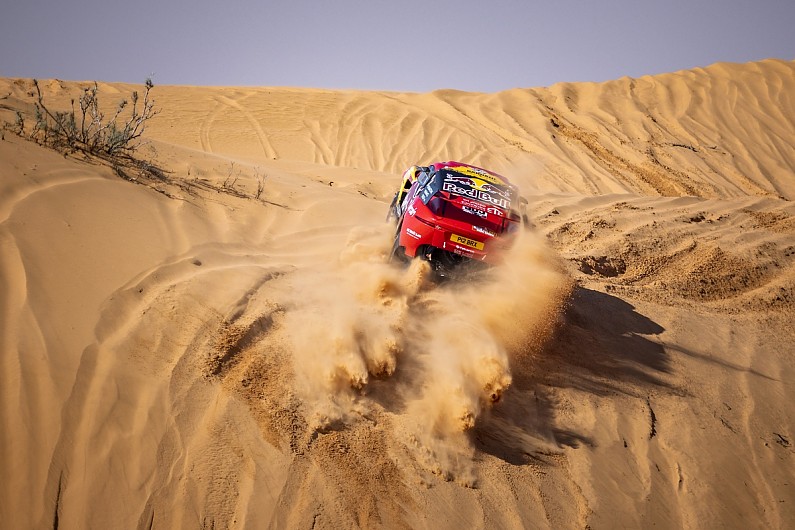 Following a limited trial in the inaugural Saudi-based Dakar last year, roadbooks are now handed to drivers just 15 minutes before the start of each stage as opposed to the previous day.

This leaves crews with no time to add their own notes and additional information, but organiser ASO has tried to compensate for this by making roadbooks more detailed.

Asked for his thoughts on the new roadbook philosophy introduced for 2021, Nasser Al-Attiyah’s co-driver Mathieu Baumel said: “Being a new system, those who adapt quicker will have an advantage.

“In fact the roadbooks are well done, it’s more a question of interpretation of the notes and transfer them to the driver.

“In addition, you need to familiarise with the new way of working with the iPad [which replaces traditional paper notes] until it becomes automatic.

“What does it change compared to last year? On the same box you can have two or three changes of CAP.

“There is a lot of information on the same box, even very small, and sometimes it is not clear which piste you need to take to validate a hidden way.

“The truth is that this first week the navigation was very aggressive and a small mistake can cost a lot of time.

“When the note is not clear we have to slow down. In these cases, I raise my left hand.

“As Nasser sees my hand he slows down, and then I give him the sign when he can push again. I think it’s better to slow down five seconds than to lose ourselves.” Who are they, what do they do & how are they chosen?