Charles Leclerc has been handed a three-place grid penalty for the Formula 1 season finale in Abu Dhabi for causing an opening lap collision in the Sakhir Grand Prix.

Leclerc was involved in a tussle with Sergio Perez, Max Verstappen and Valtteri Bottas as they ran up towards Turn 4 on the opening lap of the Bahrain race.

But he misjudged his braking point and locked up a front wheel, which resulted in him running into the back of Perez’s Racing Point car.

Leclerc was out on the spot with damage to the front of the car, while Perez was able to resume and pit for fresh rubber – before launching a brilliant charge to victory.

Verstappen, who was on the outside, was left with nowhere to go and ended up running wide to avoid the accident and skipped across a gravel trap before hitting the tyre barriers.

Leclerc was summoned to see the stewards after the race and it was decided that he was to blame for the crash.

A statement issued by the FIA said: “The Stewards heard from the driver of Car 16 (Charles Leclerc), team representatives and have reviewed multiple angles of video evidence.

“Car 16 braked too late into Turn 4, locking the front right wheel and colliding with Car 11 which was taking the normal racing line into the corner.”

Speaking after the race, Leclerc had said he expected Perez to remain wide through Turn 4, but was caught out when the Mexican cut across. 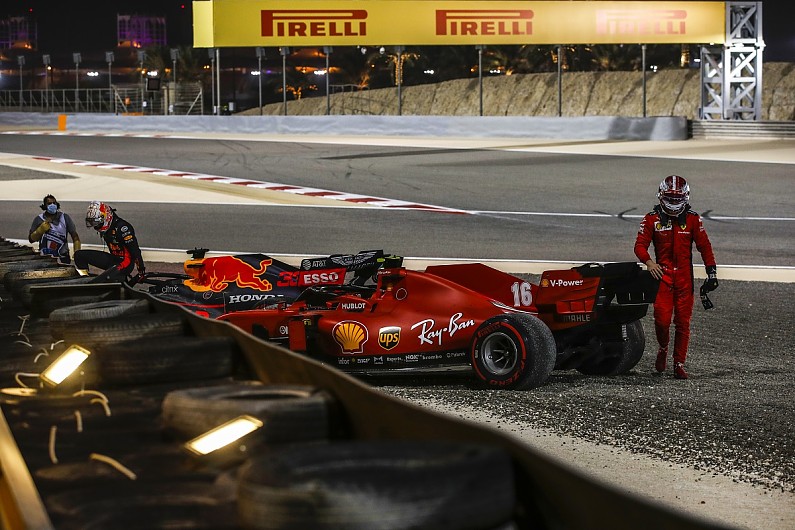 “I was in fifth I think, and I was side-by-side, a bit behind Max I think, and tried to overtake him into Turn 4,” Leclerc said.

“I had seen Checo, but I expected him to go around the outside of Valtteri and stay there, but I think he decided after to come back on the inside, and I was there.

“It was too late for me to slow down. I don’t think it’s a mistake from Checo, I’m not putting the blame on Checo. If there’s anybody to blame today, it’s me.”

Verstappen later called Leclerc’s actions as “reckless” in driving like that on the opening lap of the race.

“I don’t know why they were being so aggressive and so reckless,” he explained.

“We are all up in the front, and at the end of the day now, three cars basically were the victim of that, two cars heavily.”