Jimmie Johnson said it “still stings” that his full-time NASCAR Cup career ended with a “bittersweet” final year, but was pleased to bow out with a fifth place at Phoenix.

The seven-time series champion will switch to IndyCar next season with a street and road course-only programme with Chip Ganassi Racing, ending a run of 19 seasons with Hendrick Motorsport.

Johnson was the highest of the drivers not in title contention on his 686th career start as stablemate Chase Elliott came through from last after twice failing technical inspection to become Hendrick’s first champion since Johnson’s most recent title was won in similar fashion in 2016.

It ended a run of 10 races without a top-10 finish for Johnson, who failed to make the playoffs, after he placed third at Dover in August.

While happy with his performance, saying he “didn’t have too much riding on today”, Johnson conceded that he was still disappointed to be departing after finishing 18th in the standings.

“Ultimately this year is just a little bit bittersweet for me,” he said.

“To have the issues we’ve had and not be competitive down the stretch, not make the playoffs, all that still stings.

“But to finish with a solid top five to close things out is nice.” 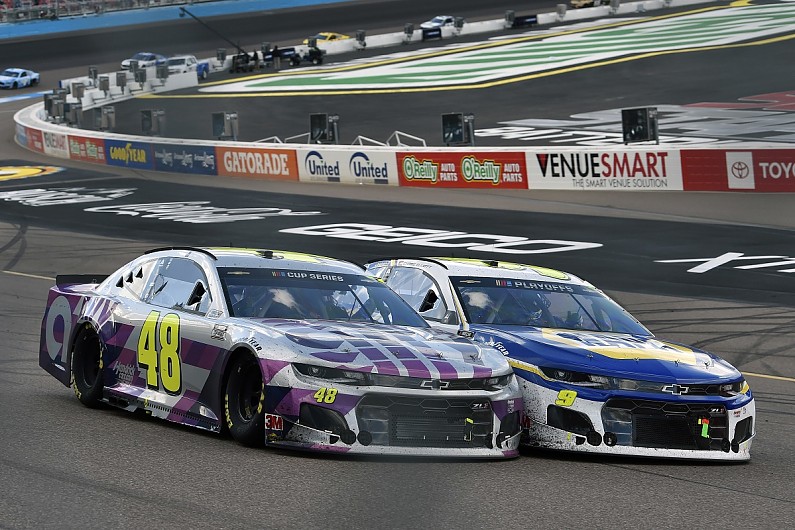 Reflecting on his career, he added: “The last couple years on track weren’t as I dreamed up, but I’ve experienced the highest of highs and worked with the greatest people, been with one team through this entire journey, and just very thankful for all the people that have helped me get here.”

Johnson revealed that he had sent Elliott and crew chief Alan Gustafson a text message of encouragement reminding them of the circumstances of his 2016 title.

“That’s what went through my mind today when I heard they were going to the back,” he said.

“I sent Alan and Chase a text and reminded them that I won a championship that way.

“Of the championships I’ve won coming from the back, I had less nervous energy in my body when I took the green flag and it was very easy what I needed to do.

“I shared that with him, and he smiled and he said, ‘I hope that’s how it goes today’ and it did.

“We didn’t think of it as a passing of the torch, but I tried to share some of my experience with him before the race.

“He doesn’t need my help, he’s plenty good on his own and I’m glad it worked out for him.”