Fabio Quartararo says his “irregular” form in 2020 “hurts a lot” as it has allowed his MotoGP championship hopes to vanish following a crash in the European Grand Prix.

The Petronas SRT Yamaha rider came into the season as one of the favourites following a breakout rookie campaign last year, and only added to this when he won the first two grands prix at Jerez.

However, his only other podium in 2020 was his Catalan GP win, and he managed just one further top five – a far cry from the seven podiums he scored across 2019.

Quartararo still trailed European GP winner Joan Mir by 14 points ahead of the race, but a crash on the opening lap at Turn 8 while trying to come through from 11th on the grid all but ended his title hopes.

“It’s hurting a lot because for me and the consequences we have with the bike that we’re struggling, I’m not happy about my season,” he said when asked about his inconsistent form this year.

“Of course, when everything is going well, everything is perfect. But unfortunately, Le Mans was already a track where the bike was straight away perfect, we could fight for the win [but I was only ninth in the wet].

“It was strange after the crash in Misano and [the Emilia Romagna] fourth, I was only one point from Andrea [Dovizioso].

“Last year I would be fifth or sixth, so this year for me one of the only riders who makes a good job is Joan, he’s consistent and that’s why he is there [leading the championship].

“I’m really frustrated, but in general it’s a tough season apart from the wins.” 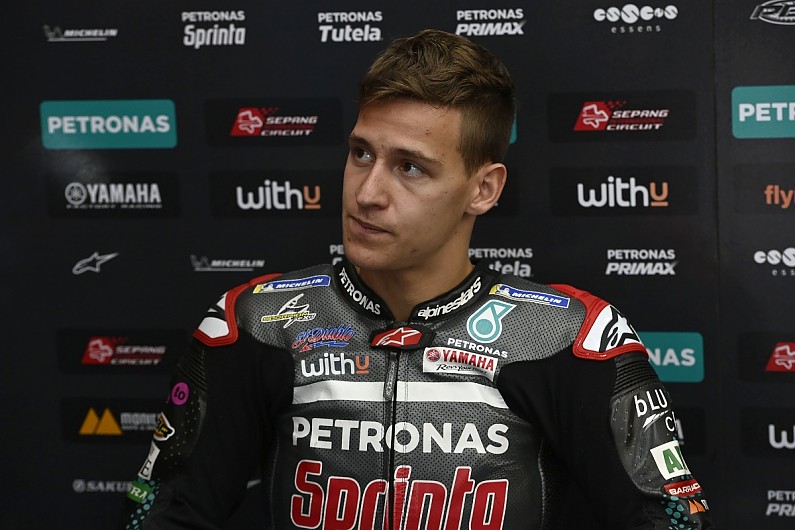 Quartararo says he crashed in reaction to Aprilia’s Aleix Espargaro sliding off in front of him, and likened it to his Silverstone accident last year when he was forced to brake when Alex Rins had a moment in front of him.

The Frenchman did re-join and salvaged 14th, but had to contend with a broken ride height adjuster which kept “automatically” engaging.

“Of course, I lose the championship today,” he said. “Then it’s Aragon 1 where we had, I would not say a fight, but we wanted to start Aragon 1 with less pressure in the front [tyre], but with the Yamaha protocol they said no and I had the worst race of my life in Aragon, where I got zero points when I actually had the pace to fight for top five, six.

“This was the second race where we lose the championship.

“I think it’s important to finish in the best way as possible, but we will need to change many things next year to make it work because it looks like the other factories work a little bit better than our factory.”