Nico Hulkenberg is set to make his third Formula 1 race weekend appearance of the season after being named as Lance Stroll’s replacement for the Eifel Grand Prix.

Racing Point issued an update ahead of final practice at the Nurburgring on Saturday that Stroll would be sitting out the session through illness, with a final decision set to be taken on his participation ahead of qualifying.

Hulkenberg – who deputised for Sergio Perez after a positive COVID-19 test for the two Silverstone races – was due to be on-site for TV duties at the Nurburgring, and was called up by Racing Point once again.

After posting a picture from outside of the circuit during FP3, Hulkenberg underwent a rapid COVID-19 test this morning in order to gain paddock access.

Upon receiving a negative result, Hulkenberg arrived in the paddock at the Nurburgring with a Racing Point team member before heading to the team’s hospitality unit. He was later seen emerging dressed in a full race suit and going into the team’s garage.

The team is expected to formally confirm Hulkenberg in Stroll’s place imminently.

Hulkenberg was left without an F1 seat for the 2020 season after being dropped by Renault at the end of last year, only to return with Racing Point for the two Silverstone races in place of Perez. 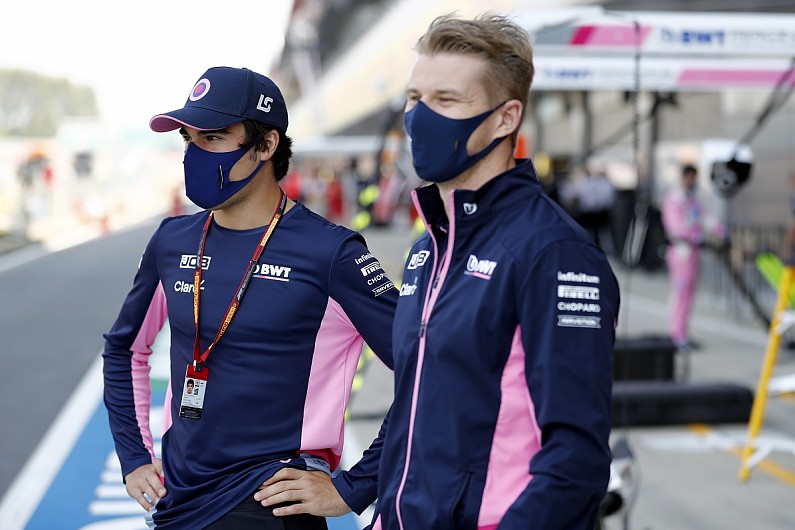 The German driver previously raced for the Racing Point team in its previous Force India guise in 2012 and from 2014-16, giving him prior experience that helped him quickly get up to speed with the team at Silverstone.

An engine issue meant Hulkenberg was unable to start the British Grand Prix, but he qualified third and finished seventh one week later at the 70th Anniversary Grand Prix, having been on-course to finish fourth before a late pit stop.

Hulkenberg is known to be in talks with other F1 teams over a possible race seat for 2021 after impressing at Silverstone while deputising for Perez.

Hulkenberg finished 10th in the last F1 race to take place at the Nurburgring, the 2013 German Grand Prix, when he was racing for Sauber.