Racing Point supersub Nico Hulkenberg reckons the only thing he did wrong on his Formula 1 return at the Eifel Grand Prix was starting in the wrong engine mode.

The German has been left without a regular F1 drive since being dropped by Renault at the end of 2019, but was called up for his third appearance with Racing Point of 2020 – after Sergio Perez was sidelined by coronavirus for both Silverstone races – to deputise for an unwell Lance Stroll, who was taken ill on Friday night.

Hulkenberg, who had been having a coffee with friends in Germany on Saturday morning when he got a phone call from team boss Otmar Szafnauer, had to dash to the circuit and only got to drive for the first time in qualifying.

The lack of running left him last in qualifying, but he drove strongly in the race and kept out of trouble to finish in an impressive eighth place.

Speaking afterwards, he said his only mistake was in not selecting the right mode for the race start.

Asked about some frantic changes being made on his steering wheel off the line, and whether it was normal, Hulkenberg told Sky: “No, that’s not normal. I was in the wrong engine mode.

“I noticed and I had to flip it quickly. It didn’t cost me anything, but it was just not a great start!” 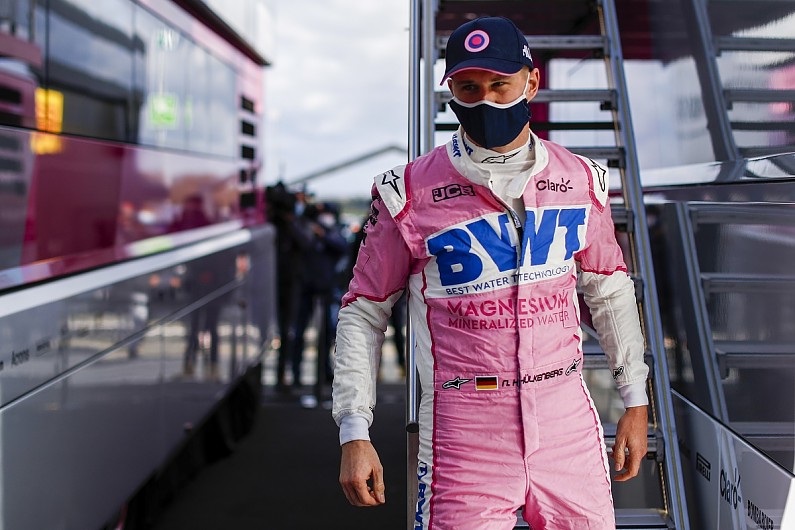 “It was all very busy with people locking up wheels,” he explained.

“We said before the race that I want to stay well out of trouble and just stay away.

“Obviously you don’t want the race to end on lap one, before it has even started, because we knew we have a decent race car underneath us and I was very cautious along the way.”

Although Hulkenberg’s appearance helped to move Racing Point into third in the constructors standings, he said he is unsure what his next steps with the team will be.

“I don’t know what happens from here on,” he said.

“I guess you just have to be ready in a way. It will be nice if we have some preparation time and take part in the weekend from an earlier stage.”

Asked if it would make sense for him to turn up at each race just in case there was a chance he was needed, Hulkenberg said: “Not sure, if there’s no real racing going on, maybe yes, maybe no.

“Maybe we need to think it through a bit more. Let’s see.”