British Touring Car Championship race winner Jake Hill is to remain at Mark Blundell’s team for 2021, but could be racing a new car.

AmD, which runs the old-spec FK2 Honda Civic Type R in which Hill has starred this year under Blundell’s MB Motorsport name, says there is a 50% chance of an upgrade to newer machinery.

Under the BTCC’s homologation rules, a car model can continue in the series until five years after it is withdrawn from the market, and the FK2 will cease to be eligible at the end of 2022.

With the series’ hybrid era arriving at the start of 2022, that leaves AmD/MB with the choice of getting to grips with a new car for one year before the hybrid switchover, or hanging on for an extra season with the FK2.

“We’re looking at two options, and it’s a bit early to say, but it’s all positive.

“The sensible thing is to stay with the Civics, but I think the new cars in the BTCC have jumped forward.”

Sources suggest that those two options could be permed from the FK8 Honda introduced by the official Team Dynamics squad in 2018, the title-winning BMW 330i M Sport, or the new-for-2020 fourth-generation Ford Focus developed by Motorbase Performance. 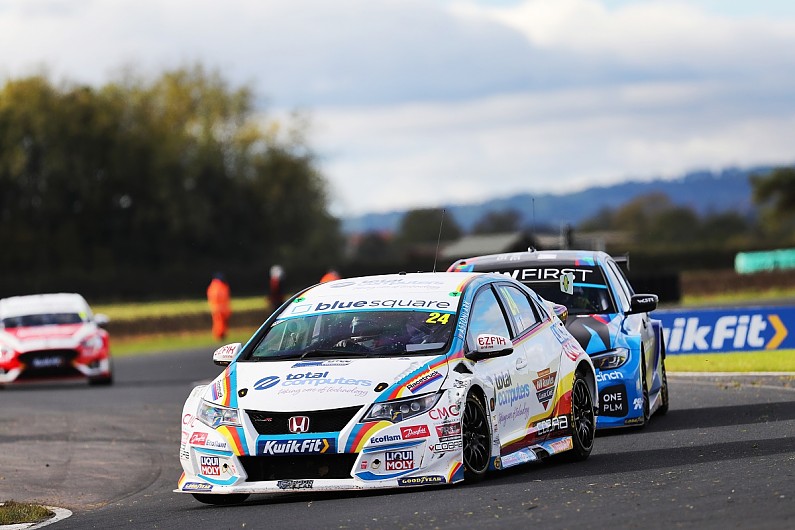 Of Hill’s retention for 2021, Hollamby added: “I woke up at Snetterton [last month’s penultimate round] one morning and thought, ‘Right, if we’re doing this next year and we’re going to have fans at the track, we’ve got to get him back – I need Jake.’

“It’s so important to have the right driver in the car.”

Hill, who lies eighth in the championship going into this weekend’s final round at Brands Hatch, said: “Together we’ve had a great year with some real success and I am in the best possible place to continue that progression.

“The team are like a family to me, and the help and advice that Shaun and Mark offer me is invaluable.

“The team dynamic is fantastic, we all get along so well and I really feel that helps push us on to these results.

“This season was only just the beginning – there’s plenty more great things to come from us yet.”

Blundell, the team’s sporting director, added: “I’m over the moon that Jake is continuing with us next season.

“We’ve built a great foundation together this season and there’s plenty of scope to build on that in 2021.

“In my mind, Jake is one of the very best out there on that grid and someone who is only getting better with each race.

“We’re firm in our belief that he can help push us towards even greater success in the future and that we have the perfect environment around him for him to take that next step too.”