Lewis Hamilton wanted to start the Formula 1 Eifel Grand Prix on medium tyres, but trusts Mercedes’ decision to switch him to softs during qualifying at the Nurburgring.

Hamilton and Mercedes team-mate Valtteri Bottas went out on-track on the medium-compound tyre to complete their initial efforts in Q2.

While Hamilton was able to sit second after the first runs on mediums, Bottas slumped down to eighth, putting him at risk of being eliminated without a soft tyre run.

Mercedes opted to switch both drivers to softs for their final Q2 runs, allowing them to ease through to Q3 where Bottas beat Hamilton to pole by more than two-tenths of a second.

Asked by Autosport about the thinking behind the tyre call, Hamilton revealed that he had wanted to start the race on mediums.

“I could have got through on that tyre,” Hamilton said.

“I wanted to start on it, just because I always like to do something different, but the team chose for us to both be on the same tyre.

Bottas explained that he had struggled to get the mediums up to temperature when completing running on the compound during the sole practice session at the Nurburgring on Saturday morning. 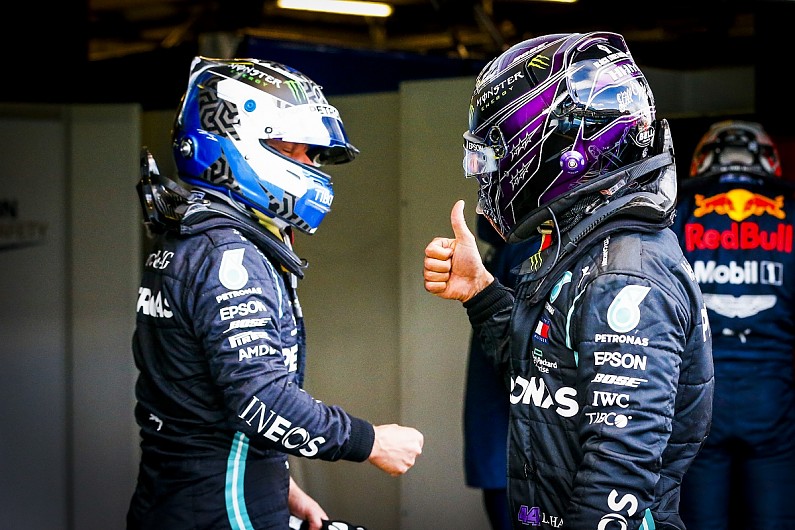 “When we had it, it was a pretty green track, so it was hard to get a proper read of the tyre, how it’s behaving,” Bottas said.

“For me, that run was quite poor. I couldn’t get enough temperature from the out lap on the tyres. I’m happy to be on the soft.”

Hamilton set a faster time in Q2 than he did in Q3, and admitted his runs in the final session did not feel as strong.

“I’ll have to go back [and review the data], but definitely Q2 felt good, and when I got to Q3, it just didn’t feel good, either run, so just the grip didn’t feel the same,” Hamilton said.

Track temperatures at the Nurburgring during qualifying reached no higher than 16ºC, making it difficult for the drivers to get their tyres up to temperature.

Hamilton thought similar conditions in the race could make managing the front tyres a particular challenge.

“The usual effects from the track getting colder is the front tyres usually suffer a bit more,” Hamilton said.

“We generally have a bit more understeer potentially. If there’s safety cars, restarting our tyres is going to be a struggle, that’s for sure.

“We’re all in the same boat. I don’t really know how far the tyres will go, but when it gets a bit cooler, generally they can go a bit further, because they work in a slightly different range.

“I hope this is still exciting tomorrow somehow.”