Lewis Hamilton has slammed Pirelli’s new 2021-spec Formula 1 tyres after all teams and drivers ran them in practice ahead of the Bahrain Grand Prix on Friday.

The revised construction was chosen after various prototypes were tested during Friday practice running at the Portuguese GP.

Pirelli analysed the data from the teams and the favoured options were then homologated for next season by the FIA.

All drivers had two sets of the new tyres to run in FP1 and FP2 in Bahrain, mainly to allow teams a chance to get a handle on them as they develop their packages for 2021.

Hamilton initially appeared to be reluctant to criticise the new tyres before not holding back, suggesting that the series should stick to the original plan and run the 2019 tyres for a third season.

“I’m trying my hardest not to say anything,” Hamilton said when asked for his reaction to the 2021 tyres.

“What I want to say is weekend in, weekend out every year we’ve got a team here from Pirelli. I have the utmost respect for the guys that come here and load our tyres up, bring them here, and keep us safe. And they do an amazing job. 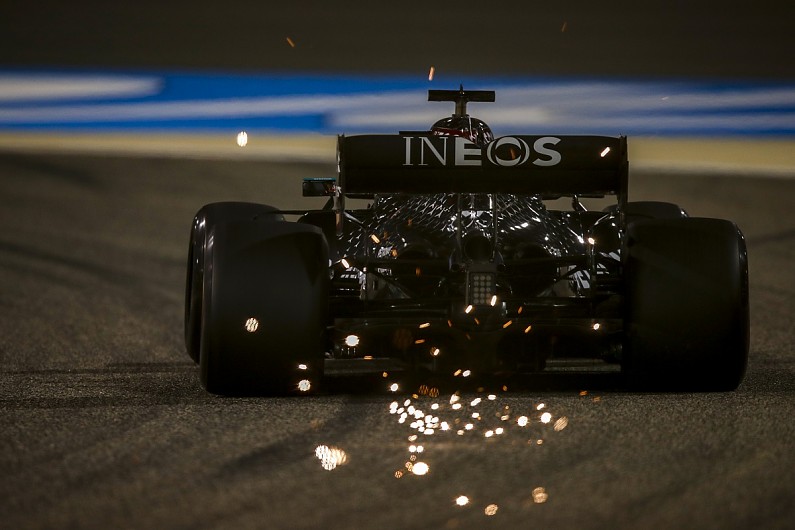 “We’ve had the same tyre for the last two years. At the end of 2019 they brought a new tyre, which they normally do. And it was quite a bit worse. So then they just said, ‘Okay, well now we just keep the tyre that we had from last year.’

“So they’ve had two years now to develop a better tyre. And we’ve arrived with a tyre that’s three kilos heavier. And it’s like a second worse per lap.

“And I know for the fans, that doesn’t really make any difference. From a driver point of view, we’re working with brands and partners who are at the forefront of technology, and elevating and moving forwards.

“And if you’re going back after two years of development, I mean, I don’t know what’s happening. So it definitely doesn’t feel good out there. And it’s a worry.

“I prefer to just stay on these tyres. If that’s all they’ve got, and that’s the best they can do, which it clearly is, we’d be better just to stay with this tyre.”

Hamilton added that it was not easy to optimise the regular race tyres for the Bahrain circuit given that the track is so different from the last event in Turkey.

“From my side we’re not particularly happy with the balance I think we’ve got. But I think everyone’s probably in a similar position out there, the track is quite slippery and it’s gusty,” he said.

“This track works the tyres completely night and day different to places like the last race in Turkey, and places like Portimao.

Alex Albon agreed that the 2021 tyres were not ideal.

“They’re slow,” said the Red Bull driver. “And they’re not really very grippy. I reckon they were over a second off what we have now, which doesn’t bode too well. We’ll see how it goes.”