Romain Grosjean says the recovery of his left hand will be the key to any return to the Formula 1 cockpit for the season finale in Abu Dhabi.

After being discharged from hospital in Bahrain on Wednesday morning, Grosjean says his focus over the next few days is recovering from the battering he has taken and doing all he can to help heal the burns to his hands.

But he says that it is the swelling of his left hand that will ultimately decide if he is fit enough to drive.

“If my left hand doesn’t work next week and I’m not able to do everything I have to do with it, I won’t take a risk and drive,” Grosjean told French media.

“But I’m trying to rest as much as I can and follow the doctors’ recommendations so that it heals.

ANALYSIS: How Grosjean’s overalls helped to save him

“First, it needs to become less swollen, because it’s very swollen at the moment. There may have been an impact on the thumb’s ligament during the crash.”

Grosjean says that it was the left side of his body that took the brunt of the impact with the barriers, when he crashed on the opening lap of the Bahrain GP.

“My whole left side was hit,” he said.

“My left ankle is sprained, my left knee was hit, and I’ve got nice bruises on my left shoulder, my left buttock and my left forearm.

“I think my left thumb wasn’t spared either. Not only this hand is more badly burnt, but my thumb is slightly sprained. 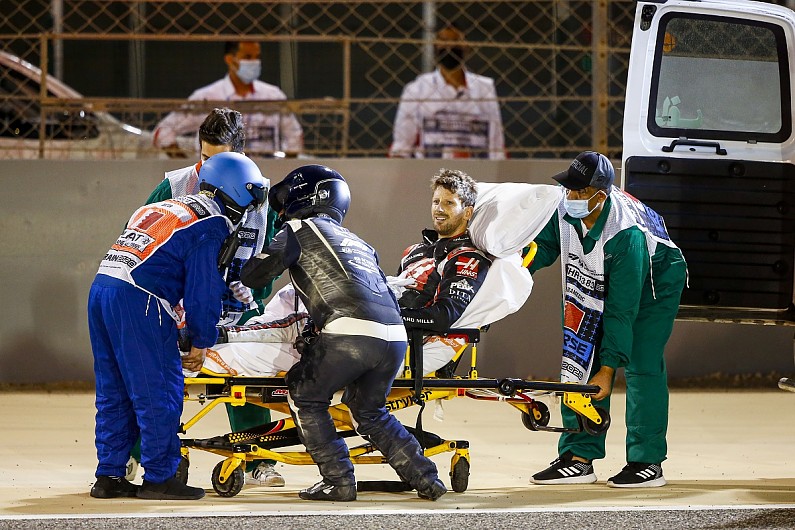 “I’ve got strength and I can move it in many ways. I can close my fist.

“However, I can’t touch my little finger yet. I would normally be able to [but I can’t at the moment] because it’s inflamed and there’s a big bandage too.”

Grosjean also sprained his left ankle as he tried to get out of the car, with his boot understood to have been trapped behind the brake pedals and coming off as he jumped out.

“It’s not actually much,” he said. “We just ice it. It has already evolved in two days, so next week it will be gone, for sure. I’m not at all worried about my left leg.

“The only real question is my left hand. I’ve got another few years to live with it, I must not mess it up!”

Grosjean revealed that he phoned his wife as soon as he left hospital and told her that he would be travelling to Abu Dhabi rather than straight home.

“Just before lunch today, I was able to walk with my left foot without pain,” he said. “It’s another small step in the right direction.

“My left hand doesn’t look great though. The pain is quite manageable – I take paracetamol, not really anything stronger than that.

“My first phone call was to Marion [Jolles, his wife], she was still with my dad and the kids, and I told them: “I’m going to Abu Dhabi. I’m sorry for you, I need it for myself.”

“I need to know if I’m able to get back into a car, what I will feel, how it will go – and whether I’m still able to do it.”