Romain Grosjean paid tribute to the halo for saving him in the terrifying crash at the start of the Formula 1 Bahrain Grand Prix as he recovers in hospital.

Haas F1 driver Grosjean crashed out exiting Turn 3 on the opening lap of the race in Bahrain on Sunday, hitting the barrier on the right-hand side of the track at 137mph with a force of over 50g.

The severity of the collision with the barrier tore Grosjean’s Haas VF-20 car in two, and caused a huge fire to break out.

Grosjean was able to escape from the fire quickly and was swiftly met by FIA medical staff, with the monocoque of his car remaining lodged in the middle of the barrier.

The Frenchman was taken to the Bahrain Defence Force hospital where he was found to have sustained burns to the back of both hands.

But after initial concerns he had broken at least one of his ribs, all X-rays completed showed no signs of any fractures.

In a video posted to his Instagram account from his hospital bed, Grosjean spoke to his fans to give an update on his condition and thank those who helped him emerge without major injury.

“Hello everyone, I just wanted to say I am OK – well, sort of OK,” Grosjean said, before making reference to the big white bandages on his hands.

An update from Romain himself. Pleased to see you’re in good spirits! We hope you make a speedy recovery ? pic.twitter.com/njnjjH4GBi

“Thank you very much for all the messages. I wasn’t for the halo some years ago, but I think it’s the greatest thing that we’ve brought to Formula 1, and without it I wouldn’t be able to speak with you today.

“So thanks to all the medical staff at the circuit, at the hospital, and hopefully I can write you quite soon some messages and tell you how it’s going.”

Grosjean will remain in hospital overnight to undergo treatment for the burns on the back of his hands, as well as being subject to further observation from the doctors. 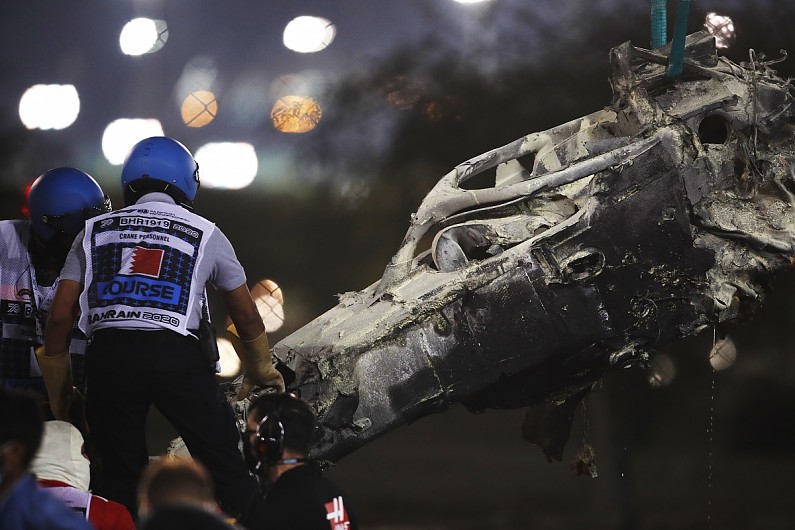 Haas is yet to confirm whether or not he will be fit to drive in next weekend’s Sakhir Grand Prix, but team principal Gunther Steiner was confident Grosjean would want to be in the car if he was fit enough.

“Knowing him, he wants to be back, but we’ll see that tomorrow when they take the bandages off because he has no idea what they look like,” Steiner said.

“For me at the moment, the only good thing is, nothing bad happened. For sure it wasn’t good, but he’s safe, he’s healthy.

“The rest we’ll see tomorrow when we speak with the doctors.”