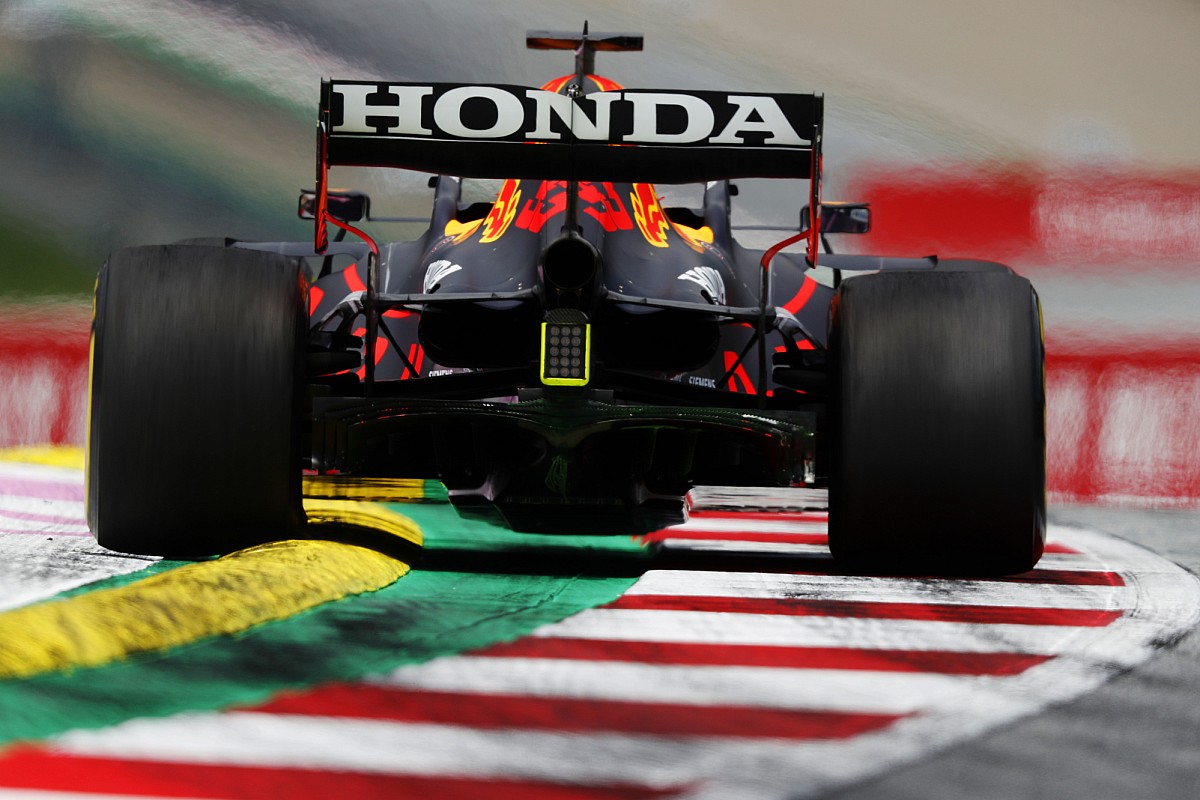 The Friday practice sessions have each been cut to one hour in 2021, instead of the usual 90 minutes each. Verstappen topped both of them, ahead of Pierre Gasly (AlphaTauri) in FP1 and McLaren’s Daniel Ricciardo in FP2.

What happened in Free Practice 1?

Verstappen set the medium-tyred benchmark at 1m06.511s, before the soft tyres runs began around the halfway point. Carlos Sainz spun his Ferrari at Turn 1, blocking the pitlane as Bottas wanted to leave on his new soft tyres.

AlphaTauri’s Pierre Gasly took a turn at the top with a lap of 1m06.166s, just before Verstappen set his session-best 1m05.910s. Bottas was on a faster lap but ran too wide at the final corner, losing a chunk of time and had his lap deleted for track limits anyway.

Gasly stayed second, a quarter of a second behind Verstappen, with Hamilton in third, 0.054s ahead of Bottas. Yuki Tsunoda was fifth in the second AlphaTauri.

The Alpines of Fernando Alonso and Esteban Ocon were sixth and seventh respectively, ahead of Lance Stroll (Aston Martin), Antonio Giovinazzi (Alfa Romeo) and the Ferraris of Charles Leclerc and Sainz. Sergio Perez spun his Red Bull at Turn 4 and was only 13th fastest.

Robert Kubica drove Kimi Raikkonen’s car in this session, and spun at Turn 3 early on, but he was still faster than Haas’s Nikita Mazepin.

What happened in Free Practice 2?

In FP2, Verstappen set the initial pace on hard tyres at 1m06.722s as rain drops began to fall on a dry track. Alonso beat that time on medium tyres, with 1m06.651s.

With spots of rain and a strong tailwind, Perez locked up and ran wide at Turn 3 and doing likewise were Verstappen and Hamilton. Meanwhile, Sainz spun into the gravel and escaped at Turn 4.

Hamilton then went to the top, setting his 1m06.358s on hard tyres, until Verstappen beat him with 1m06.192s as the rain threat abated.

Bottas went early with his soft-tyre run but failed to beat Verstappen’s lap. Aston Martin’s Lance Stroll leapt to the head of the times on 1m06.192s on soft rubber, which was beaten by teammate Sebastian Vettel on 1m05.934s.

Hamilton went fastest again on 1m05.335s, but this lap was deleted due to exceeding track limits at the final corner, so Verstappen’s next lap of 1m05.412s proved to be the quickest of the day.

Bottas was only 12th, sandwiched by the Ferraris, and his day went from bad to worse when he spun exiting his pit box on fresh hard tyres – fortunately without hitting anything or anyone. The McLaren mechanics, who were out in the pitlane at the time, helped him reverse and rejoin.

Elsewhere, Mazepin spun at Turn 4 and rejoined, while FP1 star Gasly had an issue with his power unit and watched the entire session from pitwall.