The Italian, who on Friday was confirmed at Alfa Romeo for 2021, made up six places on the first lap from last on the grid, helped by some contact ahead.

He eventually finished in 10th place, logging his third points finish of the season.

With little to lose from the back of the grid, Alfa took a different route by putting Giovinazzi on soft tyres for the start, while the nine cars immediately in front of him were on mediums.

He out-dragged the Williams of Nicholas Latifi off the line, and then exiting the first chicane he passed Romain Grosjean in the Haas and Racing Point’s Lance Stroll when both ran wide, the latter after damaging his front wing.

At the exit of Tosa he gained two more places when Kevin Magnussen spun and he was also able to duck inside Alfa team-mate Kimi Raikkonen. He then passed Ferrari’s Sebastian Vettel into the following corner.

“[Saturday] night I did again quite a lot of work watching all the starts, from Formula Renault, Formula 4, all the stuff I had here in the laptop. 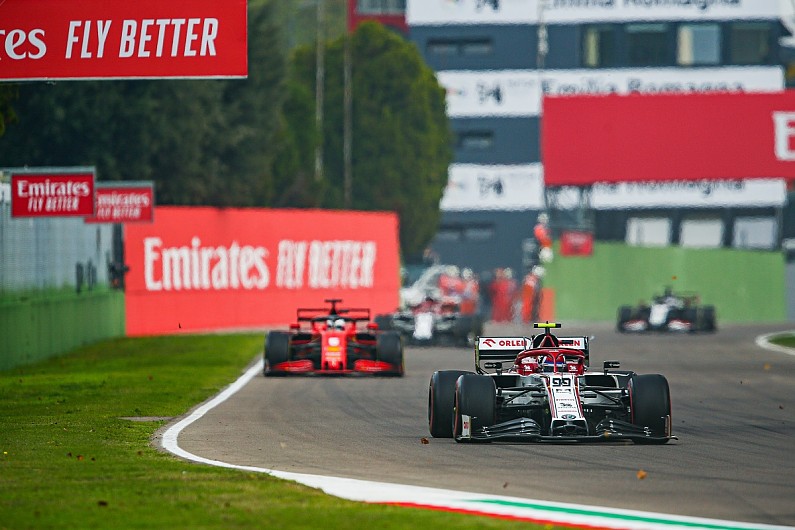 “And I put it all together on lap one, a little bit of luck and everything, and this is it.

“We pushed quite a lot in the beginning of the race with the soft, and then we changed to medium, pushing until the end.”

Giovinazzi did not pit under the safety car late on, but managed to hold onto his 10th place after the resumption, finishing just behind Raikkonen, who had undertaken an unusually long opening stint.

“It was a little bit tricky in the end, with the mediums they were quite old, and the temperature dropped. It was difficult to keep the people behind who were on softs,” he added.

“I did the maximum to keep all the cars behind, and I was in the points, so I was really pushing very hard. It’s a good thing to celebrate the renewal of the contract.

“I think it was all good. I think also with Kimi scoring points with two cars is something great for the team and Alfa Romeo.” Honda: Marquez will still find a way to be himself on MotoGP return | MotoGP News