Gerloff: Rossi thanked me for looking after his Yamaha MotoGP bike – MotoGP

Garrett Gerloff says Valentino Rossi thanked him for looking after his Yamaha MotoGP bike during his maiden premier class outings on Friday at the European Grand Prix.

The American World Superbike rider was placed on standby for this weekend to replace Rossi, after the Italian tested positive for COVID-19 on Tuesday having already missed the Aragon double-header because of the virus.

Rossi passed a second test before travelling to Valencia on Thursday, and was cleared to race on Friday – but not in time to take part in the first two practices, with Yamaha electing to put MotoGP debutant Gerloff on the bike.

Gerloff was 16th in the wet FP1 session and ran as high as fifth in the drying FP2 at one stage before being shuffled back to 19th, albeit only 1.6 seconds off the pace.

Rossi came to the Yamaha garage and spoke with Gerloff after FP2 and congratulated the American for a job well done.

“I wasn’t thinking about it a lot, but in the back of my mind I was thinking ‘alright, this bike is expensive and it’s not mine, so I should probably take care of it’,” Gerloff said, when asked if he was aware Rossi was watching on.

“I didn’t realise Valentino was in the pits during the second sessions, and so when the session ended and I came in he was there.

“One of the first things he said was ‘oh man, good job and thanks for taking care of my bike’.

“So, to keep it on two wheels was nice and really happy I didn’t have any big problems with it because I definitely didn’t want to make the GOAT, the greatest of all time, angry.” 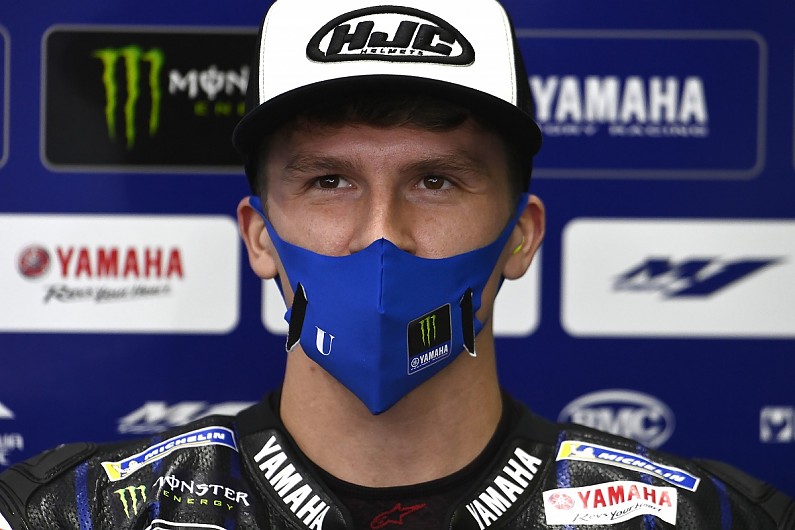 Gerloff rides a Yamaha R1 in WSBK for the GRT team and found the difference in feeling between the R1 and MotoGP M1 wasn’t “super-big”.

“The way it feels is it’s not super-big, not as big as maybe I was expecting,” he added.

“But in the end, it’s all the details that make the biggest difference.

“That’s what I’ve learned at least this year with World Superbikes, we found small places to improve, but after the whole race it makes a huge difference.

“So, for me to feel something like this and to already know it’s giving me this much here, here and here, it makes a lot of difference after a full lap.”

Gerloff admits he felt there was “still quite a bit of margin” for him to push on the M1, while adding he’s unsure if there will be any more opportunities for him to ride the Yamaha MotoGP bike in the future.