Pierre Gasly says he can remember “every single second” of his shock maiden Formula 1 victory at the Italian Grand Prix after taking time to fully reflect on the result.

Gasly took a surprise win for AlphaTauri at Monza in September after a red flag and a penalty for leader Lewis Hamilton shook up the pecking order.

Gasly was able to move into the lead once Hamilton served his penalty before fending off McLaren’s Carlos Sainz Jr in the closing stages to take a famous win.

The result marked only the second victory in the history of the AlphaTauri team, and made him the first driver not racing for the ‘big three’ of Mercedes, Ferrari and Red Bull to win a race since Kimi Raikkonen in 2013.

PLUS: Why 2020’s underdog star is relishing a year of continuity

Some of the most striking images from the race came during the podium ceremony, where Gasly sat on the top step as he came to terms with the enormity of his achievement.

The events of the Monza race and celebrations that followed are still strong in Gasly’s mind, even if the Frenchman felt it had been difficult to truly realise its significance due to the hectic 2020 F1 schedule.

“I remember every single second of that race and of the celebration,” Gasly told Autosport.

“It’s something which is in my mind and will never go away. 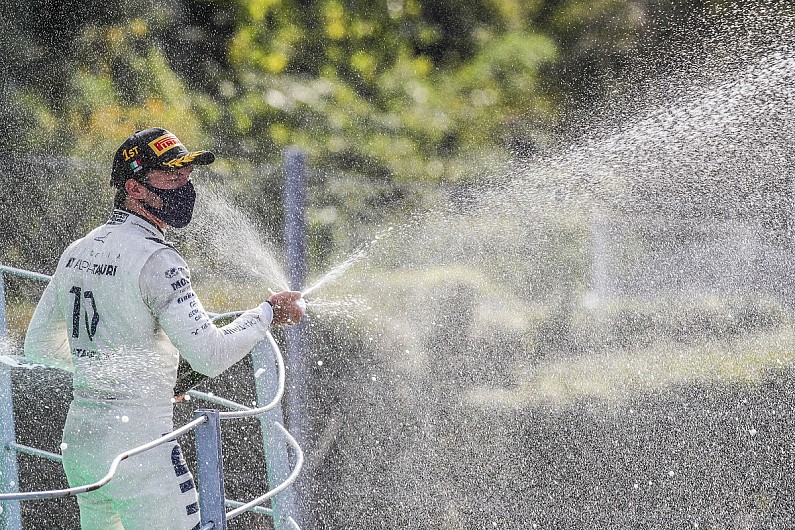 “I would say this year was so compact and intense that it was actually hard to really take the time off, and get to relax and enjoy as much as probably I would have done in a more normal scenario without COVID.

“Still, when I had a week’s break between two races and I could get back home and I could realise, ‘OK, that’s what we’ve done’, and really try to think over and remember all of the emotions that we lived.

“It was something quite incredible. This year, Mercedes won pretty much all the races, except Max [Verstappen] and Checo [Perez] – and us.

“So it was really something incredible.”

Gasly revealed that he keeps the winner’s trophy from the race at his apartment as a source of motivation, but felt the result had empowered the entire AlphaTauri team.

“When I’m in Italy in my apartment, that’s where I stayed over the [Monza] weekend, it was the first time to sleep at home for a race weekend,” said Gasly.

“I’m sat exactly there, the same place I had my breakfast before my win, and I see the trophy and kind of feels pretty special.

“It’s a great motivation. Every morning, I take my coffee with the trophy in front of me, and think ‘yeah, we’ve done it’. It’s not impossible, even though we were a midfield team.

“That should be a motivation for all of us in the team to try and repeat as much as we can, strong performances like we have had in Sao Paulo or in Monza.” F1 must accept Netflix’s artistic licence with Drive to Survive ‘Race of survival’ hardest for Williams since 2019