Max Verstappen finished second for Red Bull ahead of Sergio Perez, with Bottas ending up down in 11th as none of his soft tyre runs stood.

Romain Grosjean’s replacement at Haas, Pietro Fittipaldi, established the P1 benchmark at 57.855s on the medium tyres, which he quickly brought down to a 56.949s as he completed the early running solo on the Bahrain track.

Kimi Raikkonen then took the top spot with 56.082s on the hard tyres, before the Alfa Romeo driver was quickly shuffled down the order by Carlos Sainz Jr, Lance Stroll and Perez – with the trio running the medium compound at this stage.

Renault’s Esteban Ocon, also using the yellow-walled rubber, took over in first place on a 55.210s, which he improved to 55.185s at the 15-minute mark of the 90-minute session.

Ocon remained fastest for the next 10 minutes before Verstappen posted a 55.043s on the medium tyres – the quickest time before the soft-tyre qualifying simulation runs began heading towards the halfway point.

Perez led the pack out on the red-walled softs, and used them to go quickest on a 54.866s, despite not setting a best time in any of the track’s three sectors.

The Mercedes drivers began their runs on the soft tyre at the 45-minute mark, with Bottas setting the quickest time in the middle sector on his first lap.

He ended that attempt with a time of 54.506s, but he did not stay in the top spot for long as the lap was quickly deleted because Bottas had run too far wide exiting Turn 8, “cutting behind the red and white kerb on the exit” beyond the right-hander – per the updated FIA stipulations following FP1. 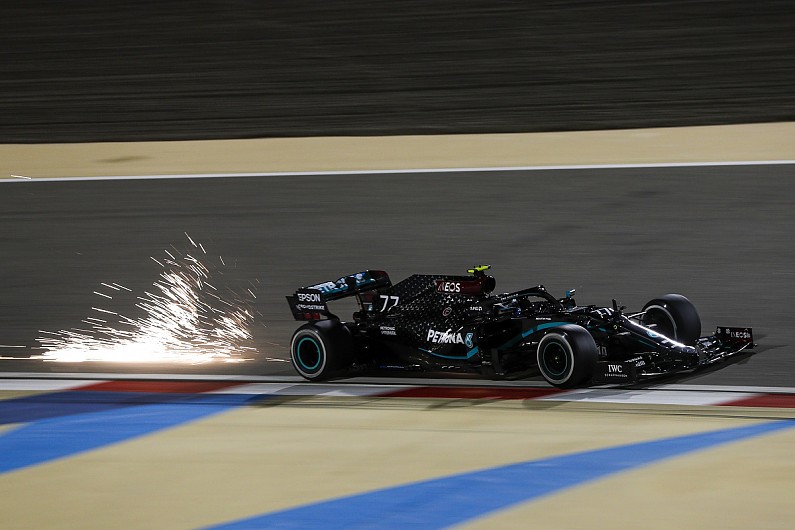 Russell was next to post a time on the softs – a 54.713s – which stood as the quickest lap for the rest of the session, albeit 0.207s slower than the time Bottas lost.

Bottas had continued to circulate on his set of softs, but he ran wide twice more exiting Turn 8 – backing off each time, with one of his slow efforts also deleted under the new focus on track limits at that spot.

Later, during the pack’s long-run data gathering that followed the soft tyre efforts, Mercedes warned Bottas that it had received “feedback from race control” which said he was “always on the limit at Turn 8”.

Verstappen was able to shuffle Perez back to third during his efforts on the softs, as complained about understeer on his way to setting a best time of 54.841s.

Ocon ended up with the fourth fastest time ahead of the second Red Bull driven by Alex Albon, another driver to lose a time for running too wide exiting Turn 8, although not his quickest time of the session.

Daniil Kvyat finished sixth for AlphaTauri ahead of Stroll, Daniel Ricciardo and Pierre Gasly, while Carlos Sainz Jr – who lost gear synchronisation on his McLaren early in race simulation running – rounded out the top 10.

Bottas’s 55.321s, set on the hard tyre during initial running, ended up as his fastest time of the day.

Ferrari had a tough second practice session, with Sebastian Vettel the Scuderia’s top runner in P16 – after two spins during the first half of the session. 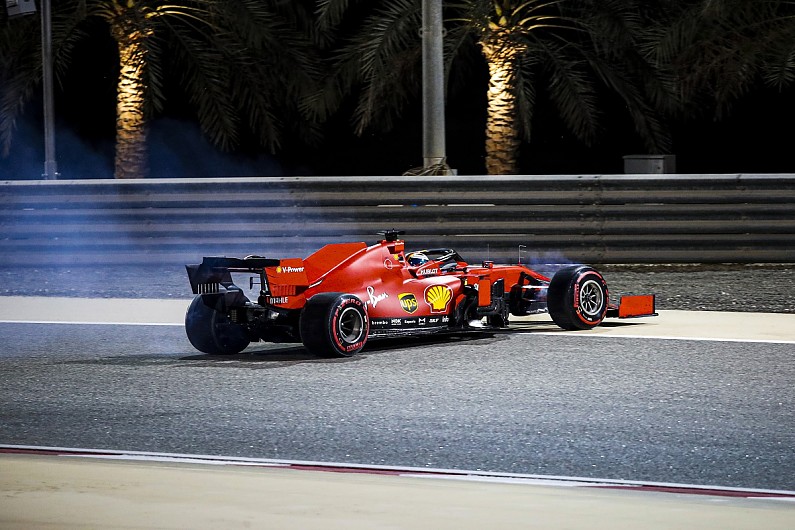 First Vettel lost the rear of his SF1000 as he accelerated through the left of Turn 2 and spun sideways, damaging his medium tyres.

Then, on a soft-tyre run, he went too far wide exiting the fast left of Turn 5 – the first corner of the ‘outer loop’ track that deviates from the normal Bahrain GP layout – catching a snap of oversteer, which meant he dipped his right-rear wheel in the gravel and spun to the inside at high-speed.

This took Vettel across Kevin Magnussen’s bows as the Haas driver toured slowly through the new, high-speed sequence, but the Dane avoided contact by stepping hard on the brakes as the Ferrari spun off into the gravel, from which Vettel was able to slowly exit.

Charles Leclerc did not set a time due to damaging a driveshaft early in the session just after setting a then fastest time in the first sector. He lost drive after running wide over the controversial Turn 8 exit kerbs and was forced to coast back to the pits, where he was collected by his mechanics just past the pit entry.

Ferrari worked on his car to try and get Leclerc back into the session, but he did not reappear after completing just two laps.

Lando Norris’s session was also ended early after a problem was detected on his power unit, which followed the McLaren driver running deep over the kerbs accelerating through Turn 3 and damaging his floor during the early laps.

Norris ended up P17 in the session’s final standings.