Fabio Quartararo says he took a cautious approach to Friday’s MotoGP practice for the French Grand Prix, worried the damp conditions meant he could “lose the championship” with a mistake.

The Petronas SRT rider was 18th at the end of the fully wet FP1 session at Le Mans on Friday and currently sits outside of the Q2 positions on combined timesheets after he was 1.133 seconds off the pace in the drying FP2.

“In these conditions I took care because it is not two laps in FP2 that will make a big difference during the weekend,” Quartararo said.

“You saw [Luca] Marini’s crash in Turn 4 [in Moto2 FP2], and here with Maverick [Vinales] there was a big difference in terms of lap times [between us].

“So, in these conditions when it is tricky and we know that the day after will be better I prefer to stay calm, to not do stupid mistakes.

“That is why today I took it really easy and I think that was really important.

“In conditions like this you can lose the championship really easily.”

Last month Quartararo insisted his main focus was not on the championship and is simply trying to score the maximum points he can from each round. 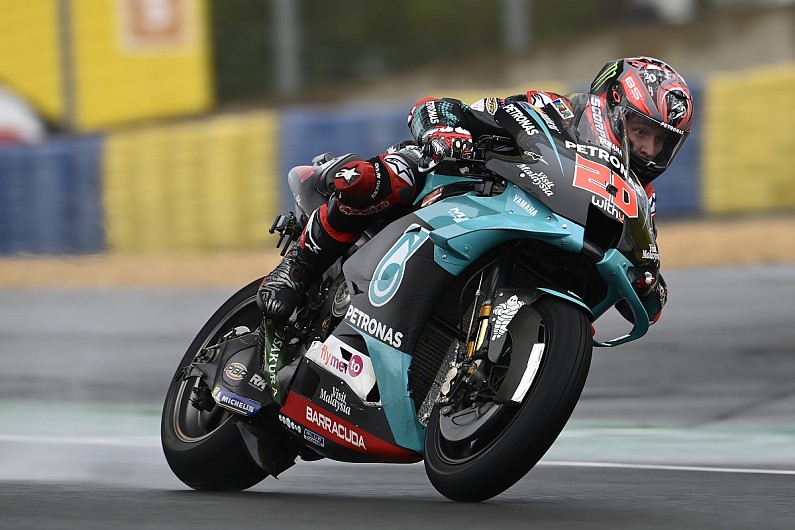 However, his caution during Friday practice at Le Mans as well as his decision to avoid this week’s Algarve track test to negate the risk of injury suggests Quartararo is thinking more towards the championship.

When asked by Autosport if this is the case, he replied: “I don’t say that I am not thinking about the championship.

“I think we don’t need to do things that can make our title chance lost.

“Let’s say we need to be clear about our potential, we have the potential to win the world championship, so at the moment I am taking it race by race.

“But it is true that in these kind of conditions I prefer to not to take many risks that are not worth it because in the end we don’t need to be on the limit all of the time.

“I know when I need to be on the limit, and I think today was correct to ride in this way.

“I think today was a great moment for me because it was difficult.