Rene Rast completed a clean sweep of DTM victories at Zolder on Sunday to boost his championship chances, as both of his title rivals faltered.

The German had qualified third on the grid behind polesitter Timo Glock and Sheldon van der Linde, but a lightning quick start allowed him to dive between the two BMWs and take the lead into Turn 1.

There was further drama for BMW as Glock tagged the WRT Audi of Ferdinand Habsburg, sending both cars straight through the gravel and promoting Mike Rockenfeller to second ahead of van der Linde.

Robin Frijns was on a charge in the early stages of the race, immediately passing team-mate Nico Muller before reeling in van der Linde on lap three to move up to third.

However, the Dutchman’s title hopes took a major blow when exiting the pitlane after coming in for an early stop on lap 11 when he understeered into the barriers as the pit exit turned left to rejoin the track.

The incident caused terminal damage to the Audi’s steering rack and he was forced to park the car immediately, bringing out the safety car. 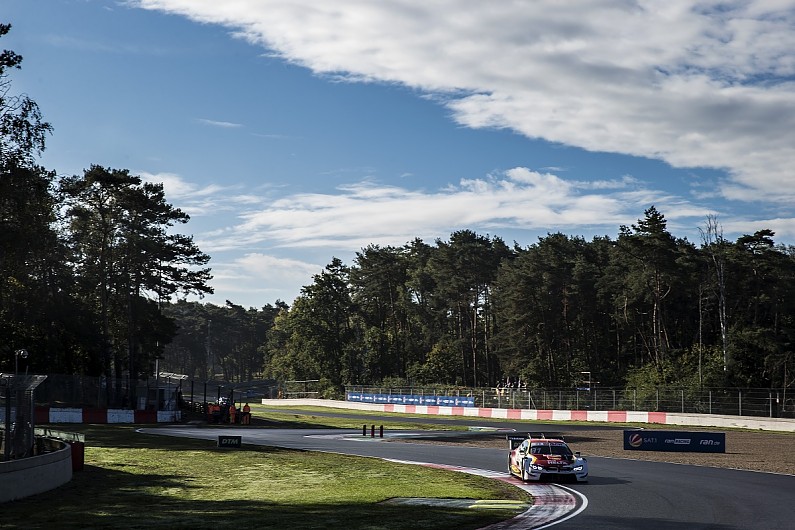 Rast and Rockenfeller immediately dived into the pits at the end of lap 12 and retained their positions after all drivers had completed their stops.

From there on, Rast enjoyed a clear run to the chequered flag, scoring his fifth victory of the season and propelling himself to second in the drivers’ standings ahead of Frijns.

The German driver also cut into the lead of championship leader Muller, who endured a troubled race en route to ninth – his worst race finish of the season.

Abt elected not to pit Muller until after the safety car period was complete, dropping him to eighth.

Despite having the advantage of fresher tyres, Muller was unable to make any inroads and eventually dropped to ninth behind BMW’s Marco Wittmann, who had to come into the pits for a second time as his initial stop didn’t count towards his mandatory pitstop.

At the front, Lucas Auer finished third for BMW, scoring his first podium finish since his victory at the Lausitzring back in August.

Glock, who had slipped to last after his opening lap coming-together with Habsburg, recovered strongly to finish fourth, taking advantage of an early pitstop to gain track position.

The WRTs of Fabio Scherer, Harrison Newey and Habsburg likewise benefitted from pitting prior to the safety car, finishing fifth, sixth and seventh respectively.

It marked Scherer’s first points finish of the year, who prior to this race had been the only driver not to finish inside the top 10 in 2020.

Van der Linde bagged the final championship point in 10th, behind Wittmann and Muller as the ART BMW of Robert Kubica was classified 12th behind the factory BMW of Philipp Eng.