Nico Muller completed a late move on Rene Rast to win the penultimate DTM race of the season at Hockenheim and keep the title race alive heading into Sunday’s decider.

Title contenders Muller and Rast were engaged in a race-long battle at the German venue, the two trading places several times as two safety car periods added an extra element to the championship fight.

Muller eventually held off Rast in a tense finish to win by 0.6 seconds, ensuring he remains only 13 points behind the German with 28 available on Sunday.

Muller made a better launch than polesitter Rast at the start and made a lunge into Turn 1, the two title protagonists banging wheels as Rast was forced well off track.

Muller emerged out of the chaos in the lead, but the race was soon neutralised for a collision between BMW’s Marco Wittmann and WRT Audi’s Harrison Newey that sent both drivers into retirement.

Muller perfected the restart to build a 0.6s buffer as racing resumed, only for Rast to close the gap and attempt a move around the outside of the hairpin on the following tour.

While that attempt turned out to be unsuccessful, Rast got a much better run coming out of Turn 5 the next time and he breezed past Muller to return to the front.

Muller launched a counterattack and tried to repass Rast twice at the hairpin, but the Team Rosberg driver managed to rebuff each of Muller’s attempts to maintain the status quo.

When the pitstops began, Muller was the first to head to the pitlane on lap 17, with Rast following on the next lap.

The undercut worked for Muller, with Rast dropping not only behind him but also the Audis of Robin Frijns and Jamie Green.

However, with the pace advantage Rast had, he swiftly cleared Muller’s team-mate Frijns before passing his own team-mate Green with relative ease on lap 22.

By that time, Muller had stretched a 4s buffer out front, but Rast managed to wipe out his title rival’s advantage in no time, and was on his tail by lap 27.

On the following tour, Rast replicated the same move he had completed on Muller earlier in the race, passing the Abt Audi driver well before the hairpin to snatch the lead. 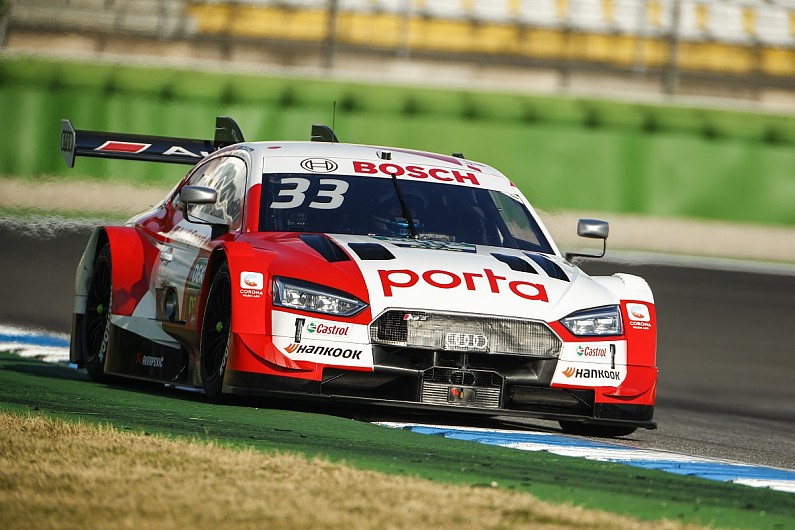 At this point, it appeared that Rast had done enough to take the victory, but a retirement for BMW’s Timo Glock brought about a late safety car, throwing a spanner in the works.

After Glock’s car was retrieved, the race resumed for a handful of laps, with Muller right on the tail of Rast, and Green not far behind in third.

Assisted with DRS and push-to-pass, Muller dived around the outside of Rast heading into the hairpin and, although he overshot the corner, he did enough to take the lead.

Rast put intense pressure on Muller in the closing stages of the race, but the Swiss driver did enough to hold on for the victory, taking the title battle to Sunday’s finale.

Green finished just behind the title rivals in third, returning to the podium for the first time since the season-opener at Spa.

Loic Duval finished nearly 5s behind in fourth, with his Phoenix team-mate Mike Rockenfeller making it an all-Audi top five.

Jonathan Aberdein was classified as the top BMW driver in sixth, ahead of Audi’s Frijns, who is now mathematically out of the title fight.

Robert Kubica was sandwiched at the start but successfully avoided any damage to his ART-run BMW to take eighth and secure his third points finish of the season.

BMW duo Philipp Eng and Sheldon van der Linde rounded out the top 10, the latter slipping down the order after contending for the final podium position at one stage.