Ducati’s Andrea Dovizioso says he “paid” for going with the wrong tyres in Sunday’s MotoGP French Grand Prix and “almost crashed 10 times” in the last laps as a result.

Dovizioso ran in the lead battle for much of the 26-lap contest at Le Mans, but struggled with a drop-off in grip in the closing stages and was shuffled out of podium contention to fourth at the chequered flag after a late scrap with Tech3’s Miguel Oliveira.

The Ducati rider went for the soft rain tyre on the front and rear, while race-winning team-mate Danilo Petrucci and second-placed Alex Marquez on the Honda fitted the medium front.

Before crashing out of second, Suzuki’s Alex Rins was making the medium rear work, while Avintia’s Johann Zarco ended up just four tenths behind Dovizioso in fifth on the same compound.

Dovizioso conceded afterwards he should have gone with the medium as he could have been able to “fight with Danilo”, but feels it’s “too easy” to say that in hindsight.

“At the end we have to be happy because we get some points, but a bit disappointed because I think we paid for the tyre choice,” Dovizioso said.

“But now it’s too easy to speak about that because you can’t know in 45 minutes how heavy it can rain or if it stops.

“So, I was struggling in the first part of the race because Danilo was very strong.

“He is so strong in that situation because his negative points in the dry most of the time is an advantage in the wet because he creates a bit more grip with his weight.

“I was struggling but I was able to be faster in the middle of the corners and the braking. 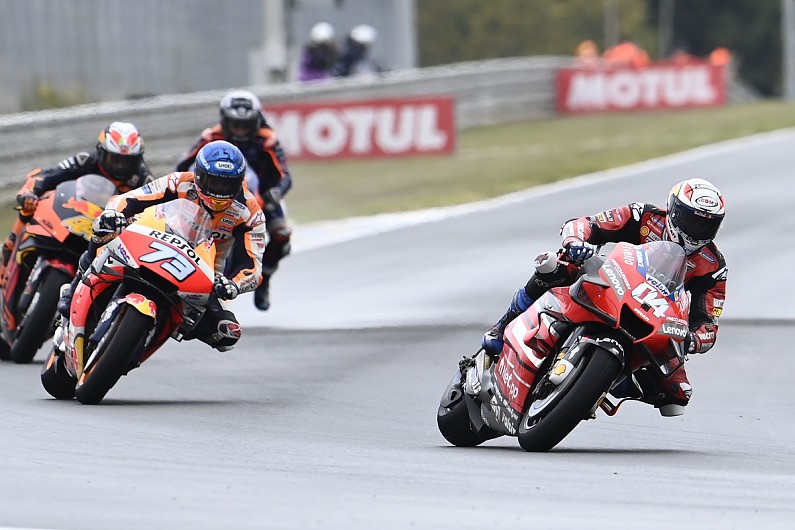 “But the last 10 laps when the water was almost zero I completely finished the tyre.

“First the rear, I couldn’t exit like him, but already I was on the limit on the front and lap by lap it got worse.

“I locked the front, I almost crashed 10 times. I tried to push until the end, I wanted to get the podium and I gained one position on the last lap on Oliveira.

“I’m happy about that, but a little disappointed because with a different tyre I was able to fight with Danilo.”

Dovizioso has closed the points gap to championship leader Fabio Quartararo – who was ninth – to 18 having been 24 adrift ahead of the French GP following his Catalan GP crash.

The Ducati rider says he can be “satisfied”, but not “euphoric” about this and admits he has to “do more” if he is to mount a serious title charge.

“When you live a season like this, leaving points around is not the best,” he added.

“Especially if we consider the points lost in Barcelona, ​​it is annoying.

“In the end, however, this is the sport, so we have to look ahead.

“You have to take a lot of risks, so making a mistake is very easy.

“In the end, we have to be happier than angry.

“We need to do more, we know, but before Le Mans the gap it was bigger.

“So we can’t be euphoric, but we can be satisfied.”