Andrea Dovizioso thinks team-mate Danilo Petrucci using him for a tow in Aragon Grand Prix Q1 “wasn’t a smart move” as it knocked Ducati’s MotoGP title hope out of qualifying.

None of the six Ducati riders made it into Q2 directly from FP3 at Aragon, with Dovizioso, Petrucci and Pramac’s Jack Miller the main protagonists in Q1.

Petrucci found himself behind his team-mate in the closing stages and topped the session, while Dovizioso – who was setting session-best sectors – ended up second.

With Miller making a late improvement to move up to second, Dovizioso’s 1m47.752s proved good enough only for 13th on the grid.

Dovizioso – who is 18 points adrift of points leader and poleman Fabio Quartararo in the standings – was visibly furious afterwards and felt Petrucci should have considered Dovizioso’s championship position as he “didn’t have the speed” to be in Q2.

“I went to qualifying with a good feeling,” he said when asked by Autosport to explain what happened in qualifying.

“I did a really good lap time and I was able to be a bit faster in Q2 I think.

“We wanted to be in the first two rows, but I was disappointed because I don’t think Danilo did the right thing.

“He didn’t have the speed to be there and he followed me three times and he did the lap time behind me. 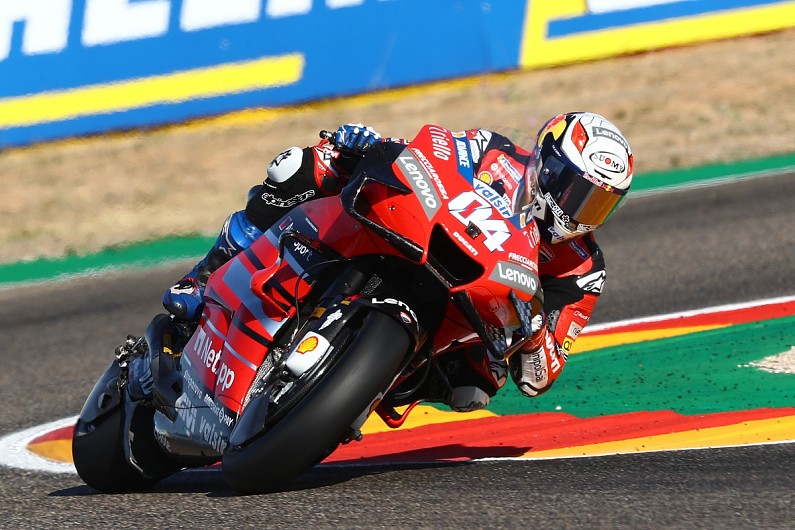 “I think with the relationship we have and that I’m the only Ducati rider who can maybe fight for the championship, it wasn’t a smart move. I was angry about that.”

“He did the lap time behind me three times because he didn’t have the speed,” Dovizioso added.

“Without me he wouldn’t be that fast. If you gain tenths because you follow me three times, this means you try to be in Q2 with my side.

PLUS: Is Aragon make or break for Dovizioso’s MotoGP title hopes?

“If I’m the only Ducati rider [who can fight for the title] and we have a good relationship because I did a lot of things [for Petrucci], it wasn’t a smart move.

KTM-bound Petrucci says he’s “so sorry” Dovizioso was dropped out of Q2, but says he’s “racing for myself” and he had to use “all my weapons” or face questions about his own lack of speed.

“I think we are free to race and it’s qualifying,” said Petrucci, who qualified eighth.

“I used all my weapons to get into Q2, for sure we’re struggling.

“In Le Mans we weren’t struggling and I didn’t follow anyone in the past.

“There’s no team order, I’m so sorry that Andrea is out of Q2 but if not I have to answer the question why I’m so slow.

“I’m racing for myself and recovering from a bad first part of the season and I have to use all the chance I have.”