Toyota driver Giniel de Villiers bounced back from a tough start to the 2021 Dakar Rally to win Thursday’s fifth stage, as Stephane Peterhansel extended his lead over Nasser Al-Attiyah.

De Villiers had been lying 22nd overall and third among the factory Toyotas after the opening four stages in Saudi Arabia, but led the 456km special between Riyadh and Al Qaisumah from start to finish to claim his 17th career Dakar stage win.

The South African’s advantage peaked at over seven minutes after the first 250km of running, but he eventually bagged the stage victory with a reduced margin of 58 seconds from countryman and Century driver Brian Baragwanath.

X-raid Mini driver Peterhansel was down in fifth place at one point but recovered ground in the final phases of the stage, eventually finishing just 2m25s down on de Villiers in third.

Crucially, the 13-time winner beat his main rival and Toyota star Al-Attiyah, who finished over two minutes adrift in fourth after winning the three previous stages in a row. 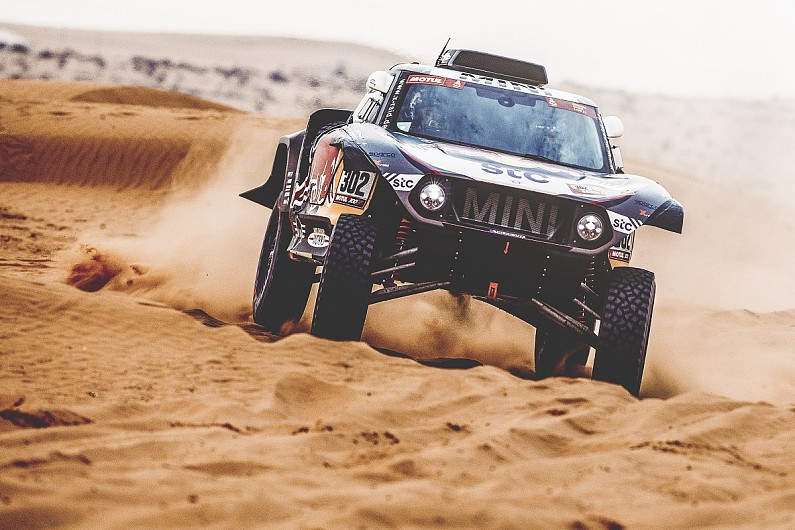 Roma was classified eighth in the Prodrive-built BRX1 ahead of reigning champion Carlos Sainz, who finished 15 minutes off the lead after getting lost in the early sections of the stage.

The reigning champion had initially slipped 25 minutes behind after running off course, but managed to regain some of the lost ground in one of the two X-raid buggies.

Following the end of Thursday’s running, Peterhansel – who has yet to win a stage – continues to lead the rally-raid with an extended margin of 6m11s over Al-Attiyah, with Sainz 48m11s off the lead in third.

Overdrive’s Jakub Przygonski moved up to fourth after finishing 10th in Stage 5, ahead of Prokop and Khalid Al Qassimi (PH Sport Peugeot).

Roma is up to seventh from Terranova and Baragwanath, with Loeb – who was furious after being hit with a five-minute penalty on Wednesday – provisionally dropping down to 10th.

After finishing second in Stage 4, debutant Henk Lategan retired from the rally on Thursday with a fractured collarbone after his factory Toyota was involved in an accident just 20km into the stage.