Daytona 500 winner Michael McDowell says he “never lost of hope” of winning in the NASCAR Cup Series for the first time after 18 years and 358 race starts.

Front Row Motorsports driver McDowell started 17th in Sunday’s race, avoiding a 16-car pile-up in the early laps, and kept close to his fellow Ford Mustang exponents throughout the race.

As the field approached Turn 3 on the 200th and final lap, McDowell tagged the rear bumper of Brad Keselowski’s Penske Ford, who in turn tapped team-mate Joey Logano, sending both cars back up the banking where they were collected by the onrushing pack.

McDowell managed to navigate his way through the melee, and was declared the winner by 0.070s from reigning Cup champion Chase Elliott, the result derived from who was ahead at the point the yellow flags were thrown.

McDowell’s victory meant only Michael Waltrip (463) has started more races before scoring a first Cup win, his coming in the 2001 Daytona 500 that was overshadowed by the death of Dale Earnhardt Sr on the final lap.

“It’s been a tough road for me,” said McDowell, whose previous best Cup result was fourth in the second Daytona race in 2017.

“I’ve had to spend a lot of years grinding it out, but I finally have felt like this last four years have been more competitive and greater opportunities with Front Row and [owner] Bob Jenkins. 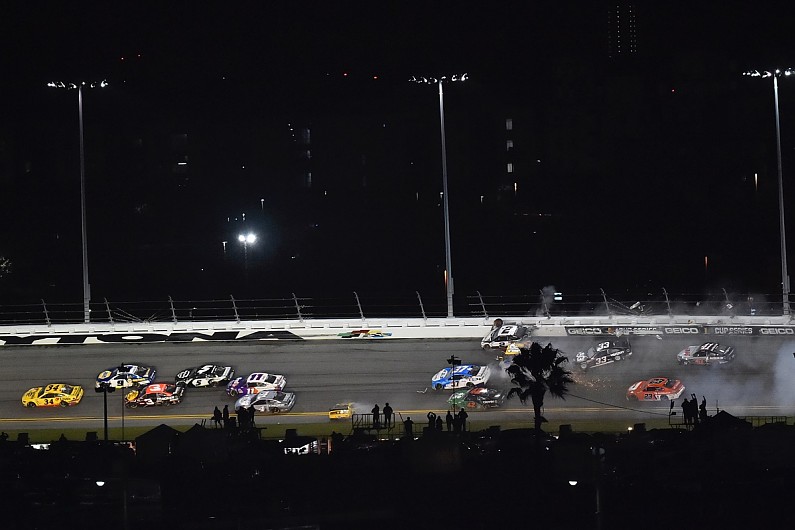 “I think that for so long, it was hard because I knew that with start-and-parking, I’m not going to run the full race, not going to have a shot.

“But even when I was start-and-parking, I was like: ‘man, one day I’m going to get a shot at it and I’ll be able to do it because of all this that I’ve put into it.’ I never lost hope of that.

“And when I come to the racetrack, when we load up and go, I really think every weekend: ‘Okay, this is the weekend it’s going to happen.'”

The 36-year-old explained after the race that his plan for the final lap was to not make a move until Keselowski had done so.

“I was in the position I wanted to be in coming to the white flag,” he said.

“But I also knew he wasn’t going to pull out with three laps to go and try to get side by side with Logano or [Kevin] Harvick and there was other Fords up there.

“I felt like if I could just stay on his bumper, that would give me the opportunity when he did make the move to hopefully make a hole and make something happen.

“The hole happened on its own. I can’t even tell you what happened.”