It means that two Honda Civics – Cook’s BTC Racing car and Jake Hill’s AmD-run MB Motorsport machine – will share the front row, with the BMWs of Colin Turkington and Tom Oliphant on the second rank.

Speedworks team principal Christian Dick showed Autosport the cause of the problem, with a right-front wishbone failure on the Corolla lowering the ride height.

“It doesn’t make it any better in terms of the result, but it does make it better in that it wasn’t a screw-up by us,” said Dick.

When asked whether the failure could have been caused by kerb-jumping, Dick replied: “It is hard on the kerbs through the chicane here, so that could be the assumption.” 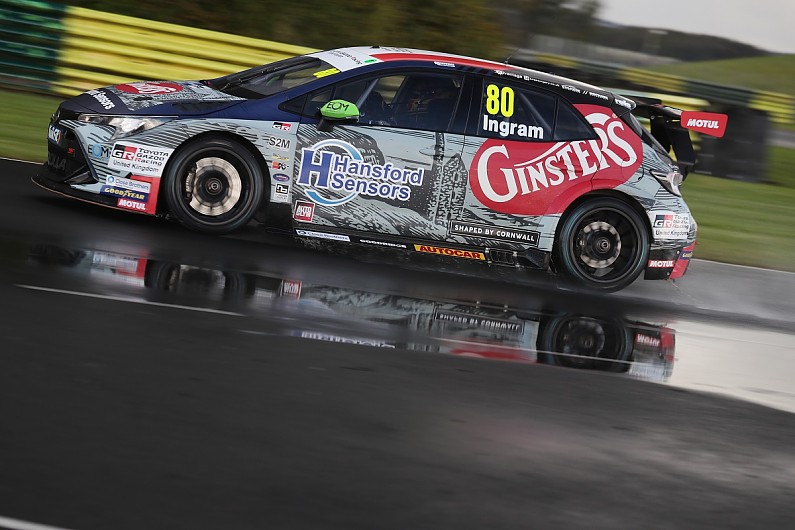 The Excelr8 squad was also disappointed with Proctor’s demotion to the back row of the 26-car grid alongside Ingram.

“We came in and changed the front tyres towards the end of the session, and maybe the pressures didn’t come up as high as expected,” Excelr8 team manager Marvin Humphries told Autosport.

“They came up on one side, and not the other. It’s a great shame, but we all know that weight and ride height are crucial in this lark.

“It’s a bit of a blow – we could have done without that.”

The knock-on effects of the double exclusion move the Trade Price Cars Audi S3 of Bobby Thompson up to fifth, sharing the third row with championship leader Ash Sutton, who caused the second red flag by crashing his Laser Tools Racing Infiniti Q50, and had his best qualifying time to that point deleted.

A trio of Hondas are next up – Tom Chilton (BTC), Matt Neal (Team Dynamics) and Michael Crees (BTC) – with Rory Butcher’s Motorbase Performance Ford Focus rounding out the top 10.