Josh Cook fended off a race-long challenge from Jake Hill as Honda Civics claimed a 1-2 in the first British Touring Car Championship race of the day at Croft.

On a partially damp circuit following wet weather overnight, poleman Cook and fellow front-row man Hill threw everything into keeping at the head of the field over the opening couple of laps.

Hill was outdragged away from the line by the West Surrey Racing-run BMW 330i M Sport of Colin Turkington, and the second BMW of Tom Oliphant also drew level with him into the first turn of Clervaux.

But Hill threw it around the outside of Oliphant, and then Turkington into the follow Hawthorne bend, to re-establish himself in second place.

Hill then drew abreast of the BTC Racing Honda of Cook across the start-finish line, but Cook kept ahead into Clervaux.

Cook, carrying no success ballast, then began to eke out an advantage on Hill’s older-spec AmD-run MB Motorsport Honda, which was on 6kg of ballast.

The gap grew as large as 0.927 seconds at two-thirds distance, before Hill began chipping away again, so that the deficit was only 0.653s at the chequered flag.

“That was a tough race,” said Cook. “I almost dropped it [on the slippery track] quite a few times and I’ve probably had five years knocked off my life-expectancy!

“Jake was adding a bit of pressure so I’m pleased to bring it home.”

Turkington, carrying 54kg of success ballast, shadowed Hill for much of the race, but explained that he was overdriving to stay with the Hondas and concentrated on bringing it home in third place. 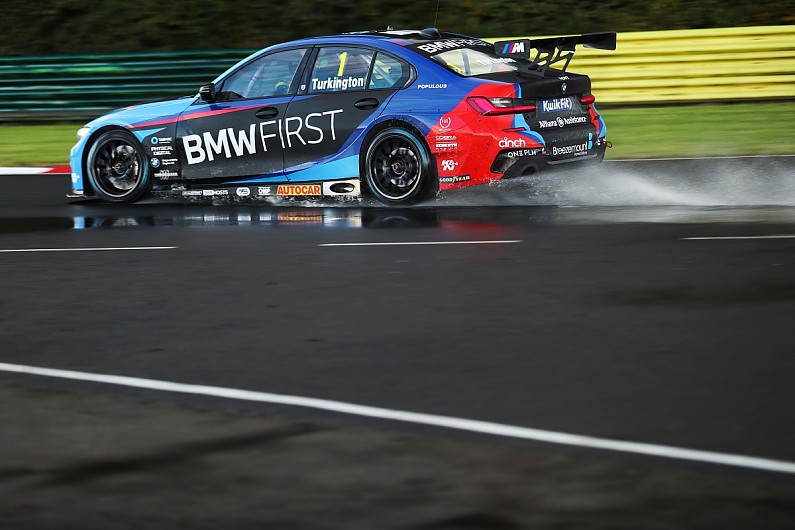 The other focus of the race was an extraordinary recovery drive from pre-weekend championship leader Ash Sutton following a first-lap spin.

Sutton, with the full 60kg of success ballast on his Laser Tools Racing Infiniti Q50, improved from his grid position of sixth to fifth at the start, and then rounded Oliphant at Tower to move up to fourth.

Rory Butcher, up from 10th on the grid in his Motorbase Performance Ford Focus, followed Sutton past Oliphant, but then nudged the Infiniti in the end-of-lap complex and pitched it into a spin, delaying Oliphant too.

Sutton ended the first lap in 14th position, but charged his way up the order to fifth, his most frequent move being a late jink inside into the hairpin.

Sutton’s final pass came with two and a half laps remaining when he zapped the BTC Racing Honda of Tom Chilton into Tower, but fourth-placed Butcher was too far ahead for him to make further progress.

After the race, Butcher had two seconds added to his race time for the collision, promoting Sutton to fourth and allowing him to remain two points ahead of Turkington at the top of the championship table.

Chilton was caught right at the end of the race by the Team Dynamics-run Honda of Matt Neal, but just kept him at bay for sixth.

Bobby Thompson, who started his Trade Price Cars Audi fifth, did a praiseworthy job to hang on for eighth, despite smoke early in the race from a tyre rubbing on a wheelarch.

Thompson crossed the line with Adam Morgan’s Ciceley Motorsport Mercedes, the second Dynamics Honda of Dan Cammish and Oliphant right on his tail.

Tom Ingram, who started from the back row after losing his pole position when his Speedworks Motorsport-run Toyota Corolla failed the ride-height test, finished 13th.