Valtteri Bottas says finishing second in the Formula 1 drivers’ championship “can’t be that satisfying” following another defeat in the title race to Mercedes team-mate Lewis Hamilton.

The Finn confirmed himself as runner-up in the 2020 drivers’ standings by finishing second in the Abu Dhabi Grand Prix on Sunday.

The result clinched Bottas second place by nine points from Red Bull’s Max Verstappen, but the Finn ended the year a distant 124 points off Hamilton at the top of the standings despite the Brit also missing one race due to COVID-19.

Asked after the race in Abu Dhabi how satisfied he was to secure second in the standings, Bottas preferred to focus on his contribution to Mercedes’ seventh consecutive constructors’ title win.

“As a driver, when you are in the best team overall this season, being second can’t be that satisfying,” Bottas said.

“But it is something, to be able to contribute to the team this season, getting the fourth constructors’ title for me in the team, and seventh in a row for us.

“It’s better than being third, for sure. I guess I will get a small trophy to take home next week [at the FIA prize giving] and I’m sure when I’m old and grey I can look this year and yeah, I was second.

“But hopefully I’ll get a bigger trophy one day.” 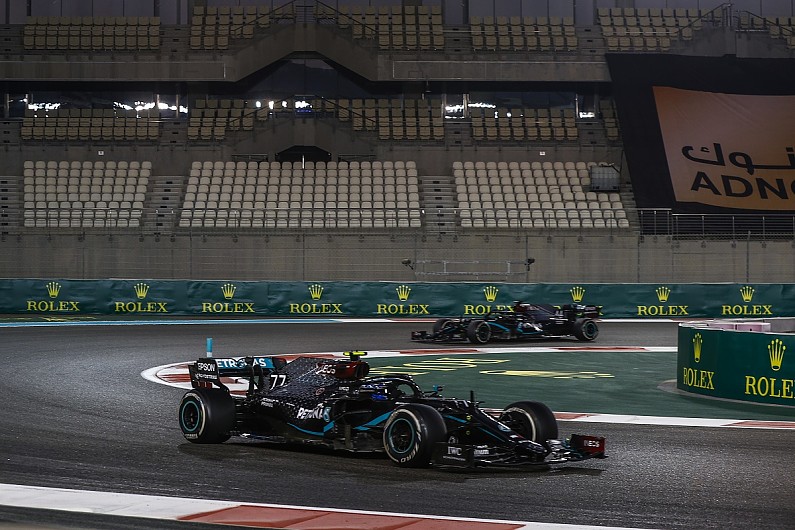 Bottas started the 2020 season strongly with victory at the season-opening Austrian Grand Prix, taking an early lead in the championship standings.

But after losing his points advantage after the third round in Hungary, Bottas scored just one more win through the remainder of the season. Hamilton ended the year with 11 wins to his name, wrapping up the title with three races to spare in Turkey.

Despite a tricky end to the year where he finished on the podium just once in the last four races, Mercedes team boss Toto Wolff felt Bottas was still in “the right mindset”.

“He had two or three very, very difficult weekends, and recovered,” Wolff said.

“He had a very good race [in Abu Dhabi] but I think maybe he has unlocked a potential that you recover even towards the end of the season, when championships are decided. I think this is the mentality of a fighter.”