KTM’s Brad Binder says he was “too narrow-minded” at Turn 2 at the start of the MotoGP Teruel Grand Prix, which led to his collision with Pramac’s Jack Miller.

Both Binder and Miller launched off the fifth row together in Sunday’s race, but only made it to the second corner when the former ran into the back of the Ducati rider.

Binder was later handed a long lap penalty for next month’s European Grand Prix and explained he went into the right-hander at Turn 2 not considering the would be as bunched as it was.

This was the second first-lap collision Binder has been involved in this season, after wiping out fellow KTM rider Miguel Oliveira at the start of the Andalusian GP in July.

“All I could say was ‘sorry bud’,” Binder said when asked what he told Miller in the gravel after the incident.

“There’s not much you can say after an incident like that because it was clear as daylight, it was just my mistake and unfortunately it cost someone else their race as well.

“I don’t know if it’s a good thing or a bad thing, but both times this year I’ve wiped out friends.

“It makes it easier to say sorry because you are mates. But at the same time, it really, really sucks.

“It was nice of him to be super-chilled about it. I hope I never do that again.

“I think all I can say is I was just too over-eager at the beginning to make up spots, but too narrow-minded going into Turn 2.”

KTM struggled throughout the Aragon GP weekend, but made a considerable step forward for the Teruel round at the same track after all four riders were equipped with different set-ups in practice. 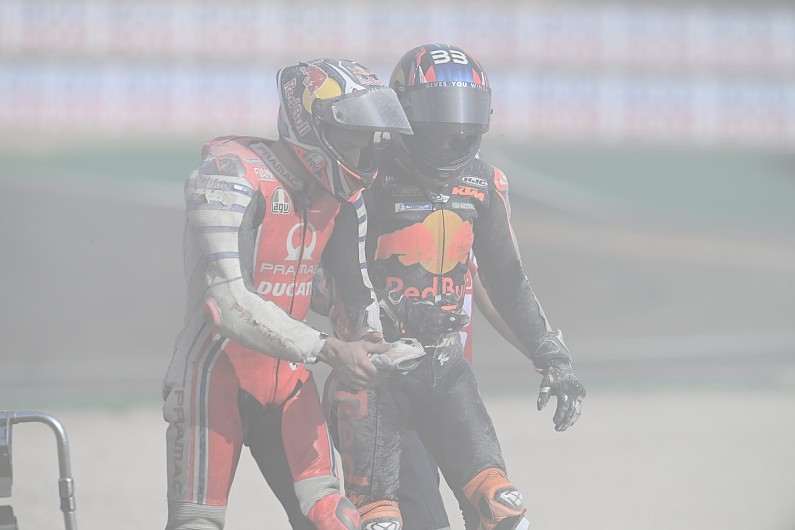 Binder says KTM was able to improve the bike’s turning, while the warmer temperatures meant KTM riders could use their preferred medium front tyre option.

Had it not been for his crash, he feels starting from 15th “wasn’t going to be a problem”, such was his feeling on the RC16.

“It’s funny because in warm-up, even though the position wasn’t good, my in-lap this morning after the flag I was coming four tenths quicker than my quickest time I did in warm-up,” Binder said.

“I don’t know why but I felt like we found something and I felt really good. I really believed starting in 15th wasn’t going to be a problem today.

“We just made the bike a little bit better for the way it naturally turns.

“Once you put the bike on angle it would come to the apex much better and make it a lot easier to stand the bike up and get it out of the corners.

“In general that’s the main thing I think we improved and in general it made it easier to go and do a race simulation or a race distance because it’s hanging on the edge of the tyre so much and just smoking the rear tyre.”