Daytona 24 Hours class winner Antonio Garcia says he was left crying from “emotion and rage” after personal bereavements and missing the victory celebrations due to a positive COVID-19 test.

As a result, he missed his final stints and had to leave the track, watching the race finish on his phone from a hotel carpark 300 metres from the circuit entrance.

Coming shortly after the death of his 98-year-old grandfather to COVID-19 and the loss of former mentor Adrian Campos – for whom he won the 2000 Formula Nissan championship – last week, the Spaniard was left in a tearful tumult of emotions.

“At the end I was crying a lot from the emotion and rage of not being able to be there and celebrate and hug the people I wanted to hug,” Garcia told Autosport.

“Being alone in a car celebrating a victory is the most surreal thing that can happen to anyone, of course.

“That’s what I missed the most: not being able, even with a mask on, to give Jordan and Nicky a hug for the job they did. 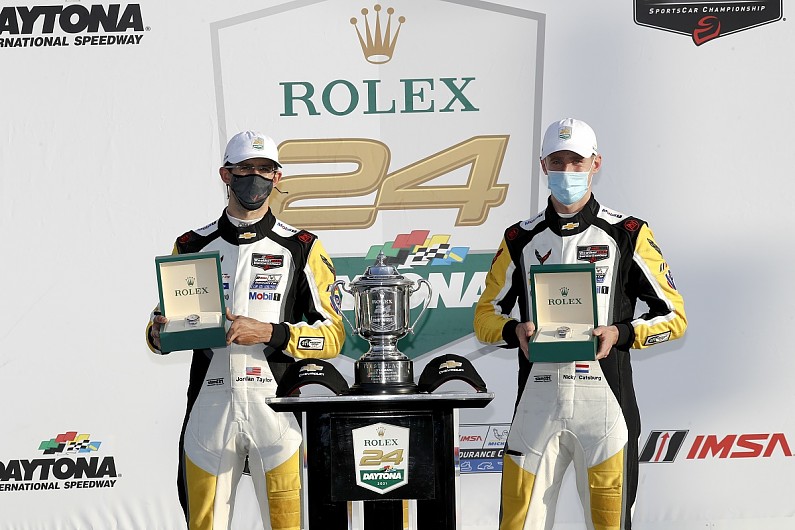 “It was also a surprise for them that they had to do the last four hours of the race without me. They gave it their all and I’m super proud of what they did.”

Asked when he learned of his positive test, Garcia replied: “Shortly after I got out of the car after a triple stint. I got the e-mail and I couldn’t believe it; in fact I asked what it meant.

“I’m glad it didn’t affect the result because there are three of us in the team. Fortunately they did a sensational job and Jordan completed a great last stint.”

Garcia admitted that his sorrow over his losses had affected his focus in the build up to the race, and that he’d only be able to shut it out of his mind while driving the car.

“It was quite a tough week, it was very difficult to be 100% focused and prepare everything to the millimetre with that going on in your head all the time,” he said.

“The only time you manage to get away from it is when you’re in the car because you’re 100% focused on what you’re doing. But out of the car, it was difficult not to fall back in… I tried to be as normal as possible.

“At some point I apologised to the team, because at times I had been quieter than usual, more fussy when there was something that wasn’t as I wanted it to be.

“You get on the edge of your nerves and it’s hard to maintain a sense of normality.”