Francesco Bagnaia says his promotion to the factory Ducati MotoGP team for 2021 is ‘deserved’ for the “great job” he has done this year on the Pramac-run GP20.

Ducati confirmed its factory line-ups spread across its works team and Pramac for 2021 last week, with Bagnaia getting the nod to replace the outgoing Andrea Dovizioso, while Johann Zarco and Jorge Martin will move to Pramac.

Bagnaia’s second season in MotoGP has yielded one podium finish so far, though he was set for one at the Andalusian Grand Prix before an engine failure and crashed from the lead of the Emilia Romagna GP late on.

He was also sidelined for three rounds in August after suffering a broken leg during practice for the Czech GP, which has left hm “not in the positions we deserved”.

When asked to comment on his 2021 move ahead of this weekend’s French GP, Bagnaia said: “Very good. I’m happy. I feel I deserve this position because the races that I finished I was strong and I was in front.

“So, we have done a very great job during this season.

“We had a bit of bad luck for the broken leg, for the engine failure [at Jerez].

“So, we are not in the positions we deserved, but I think our potential is very high, our bike is very strong and we can be happy with the work we are doing. 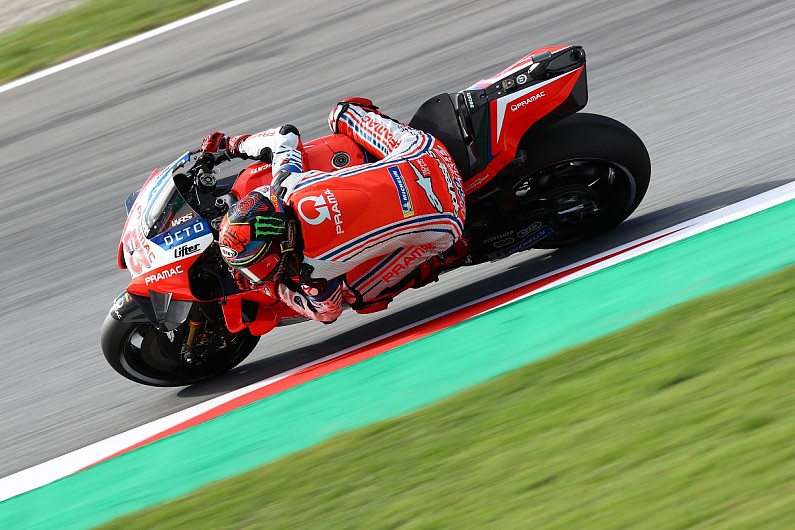 “We need more consistency and we need to finish the races, but we are there.”

The seat alongside Jack Miller at the works Ducati team next year was between Bagnaia and Avintia’s Zarco.

But the Frenchman bears no hard feelings towards Bagnaia’s promotion, as Zarco will have machine parity at Pramac and is mindful that at this stage last year his MotoGP future was uncertain following his KTM dismissal.

“It feels good knowing where to go next year and overall on a winning bike,” said Zarco.

“I’m sure I still have many things to learn on the Ducati, and from the last races the work was good but clearly on Sunday I didn’t get a good result.

“So, still I need to put all the things together but I believe I’m on the good way.

“Thanks to Ducati, all the things I’m going to do for the end of this season will be useful for next year.

“I’m also happy for Pecco, that with these three races he did he clearly showed that the factory team was for him.

“I have this step with the bike, getting a new bike, but very similar for next year.

“So, happy and fully motivated because one year ago this was not the situation in October.”