The layout of the Albert Park circuit will change before this year’s Formula 1 Australian Grand Prix.

The parklands circuit was set to undergo long-awaited resurfacing and corner profile changes after this year’s race, however some of that work has now been brought forward due to the Australian GP’s postponement to November.

Phase 1 has already been completed, with the pitlane widened by two metres and the pitwall moved to the edge of the road in place of a grass verge – a move that could see the pitlane speed limit lifted.

Phase 2 will now see the layout itself altered, the biggest change coming at the Turn 9-10 complex. What used to be a heavy braking zone into a tight right-hander will be removed and replaced by a fast, flowing transition to the run along the lake’s north-western edge.

That will effectively make it two sweeping complexes in a row, with the fast right-left followed by the existing left-right for Turns 11 and 12.

The entry speed to the Turn 11-12 complex will now he higher, which could destabilise cars before the braking zone for Turn 13 and create an overtaking opportunity.

The right-hand Turn 13 will also be re-profiled, with a wider entry and additional camber to make it less of a single-lane through the corner. 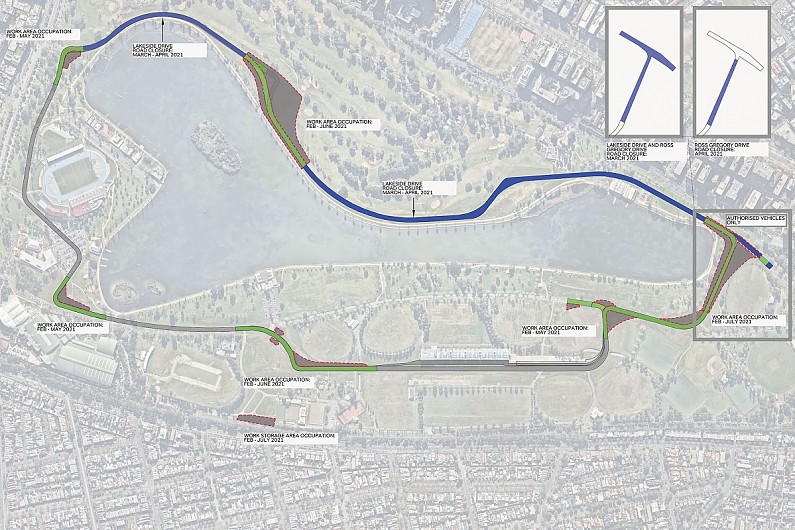 Work will begin on the layout changes next Monday and is expected to be completed by July.

Phase 3, a complete resurfacing of the circuit in a more aggressive asphalt, will then take place after this November’s race should it go ahead.

It will be the first significant resurfacing work done since the public roads were prepared in 1995 to host the Australian GP for the first time the following year.

The renovation of the Melbourne circuit follows years of debate regarding the existing layout.

Drivers and team bosses have long been critical of the layout and its lack of clear-cut overtaking opportunities.

Autosport exclusively revealed back in 2017 that the Australian Grand Prix Corporation had seriously considered ditching the Turn 11-12 complex in favour of a different corner layout, but ultimately shelved the plan.

A new deal to host the Australian Grand Prix until 2025 then saw talks of a layout change revived, while the resurfacing work was pencilled in ahead of the 2022 race at the latest. Verstappen: Perez “took himself out” in opening lap clash – F1