Fernando Alonso says his run in the Formula 1 young driver test in Abu Dhabi has ignited his “competitive spirit” ahead of his return with Alpine in 2021.

Alonso topped the times in what was his first proper outing in this year’s Renault R.S.20, following a brief 100km filming day run in Barcelona on demo tyres.

The former world champion has also been conducting a programme with a 2018 car, also on demo tyres, which included a session in Abu Dhabi a few weeks ago.

That run meant he was fully up to speed on the Yas Marina track from the start of the day, which saw all drivers running Pirelli’s C4 and C5 compounds.

He completed a total of 105 laps, setting a best time was a 1m36.333s. As a comparison to last weekend’s Abu Dhabi Grand Prix, Esteban Ocon set the Enstone team’s best qualifying time with a 1m36.359s in Q2, which earned the French driver 11th place on the grid.

Alonso’s test programme was run by Renault’s race team and thus involved the mechanics and engineers with whom he will work with next year, whereas the 2018 car testing involved a different crew.

“It was good and very nice to be back in the car especially with the race team,” he said. “I’ve been testing the 2018 car in preparation, but this one felt a bit more serious, and it ignited a little bit the competitive spirit.

“It was great to feel the modern cars and experience what they can do. I was watching the team’s progress at the weekend closely, and it was nice to experience what I learnt from the outside and then inside the cockpit today.” 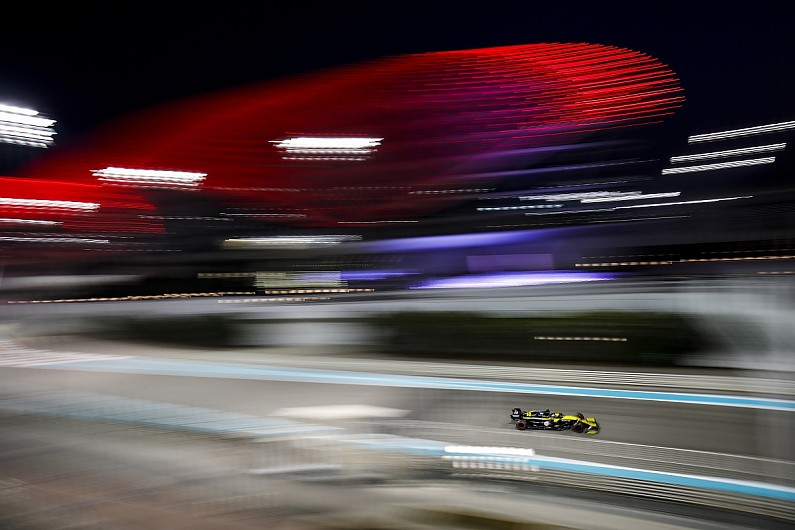 Alonso told Autosport last weekend that the test would have limited value because the cars will change for 2021, with a downforce cut and revised Pirelli tyres, but the Spanish driver confirmed he was able to use the test as good preparation for next year.

“We signed off lots of basic things we did in preparation at the factory like seat fitting, pedal position and so on, which is beneficial with only one-and-a-half-days of winter testing next year,” he said.

“We ticked boxes today and we go into Christmas and New Year with good spirit and everyone motivated in the team.”

Renault young driver Guanyu Zhou also took part in the test, setting the ninth best time of the day with a 1m37.912s.