Alexander Albon believes the updates Red Bull brought to the Nurburgring for its RB16 Formula 1 car have drawn the team “a lot closer” to Mercedes.

Albon’s team-mate, Max Verstappen, was on provisional pole after the first runs in the final stage of qualifying for the Eifel Grand Prix, initially edging out both Valtteri Bottas and Lewis Hamilton.

Although Verstappen dropped to third in the final runs, the Dutchman said after the session that some updates on the Red Bull car had offered a “good step forward”.

Having struggled earlier in the year with a skittish and nervous car, Verstappen added that Red Bull’s development plan was “all about calming everything down a bit and connecting the rear with the front a bit more”.

Red Bull ran a new design for the rear suspension upright and brake duct, following a similar concept to that used by Mercedes at the start of the year, as well as some other minor aero additions such as new winglets on the halo.

Albon was beaten to fourth on the grid by Charles Leclerc’s Ferrari in qualifying at the Nurburgring, but reported an immediate benefit when running the updated aero package for the first time in practice on Saturday morning.

“It’s all bits and pieces, front to back,” Albon said.

“We can’t compare it to the previous package, just because without the Friday running. Normally the plan was to run the cars different, the old package versus new package, so with limited running, we’ve started on it.

“It feels good, it feels quick. Straightaway in FP3, it was feeling pretty strong. I was happy with it.

“It’s a good step forward. It’s put us a lot closer obviously to the Mercs.” 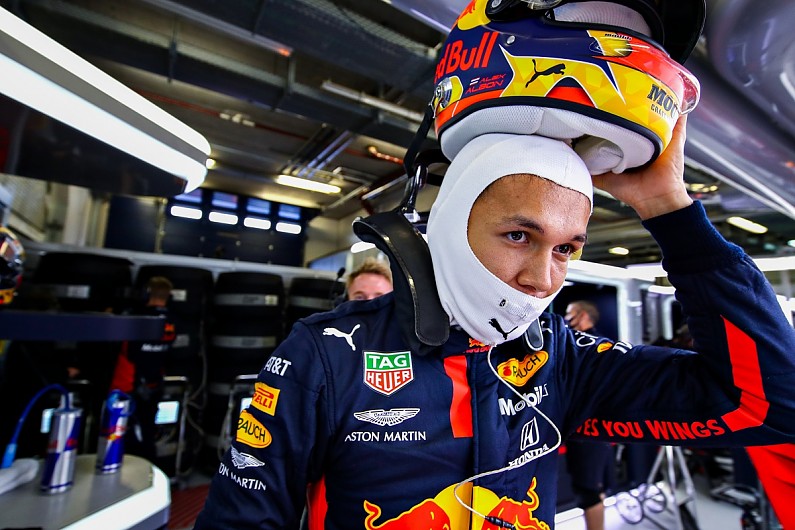 The new parts for the Red Bull car warranted a change in the survival cell on Albon’s car on Friday evening, as the team committed to running them despite having the first two practice sessions called off.

“The package is quite a big one,” Albon said.

“From what I understand, it’s easier to change tub and have it ready-made for the other pieces.

“It’s always been planned to happen this weekend.

“So you could say it was a pretty substantial change in that sense. But I think the cell thing is a bit misleading. There were some things that were just easier and quicker to do with a new cell, new monocoque.”

Mercedes team principal Toto Wolff said the pace shown by Red Bull in qualifying proved it had to continue with developments for 2020 despite shifting attention to next year.

“We tend to see this pattern that Red Bull catches up towards the end of the season and I guess it’s good for the championship,” Wolff said.

“We are deploying the strategy that we believe is right, balancing next year and this year and some of that you can see on the results on-track.

“But you need to be vigilant, and accept that the competition will increase over the last few races.”