Albon put in what he felt was his best qualifying performance of the season to earn fifth on the grid for what could be a decisive race as he tries to hang onto his seat for next year.

Red Bull’s management has given him until the final event of the season to prove himself in the face of strong competition from outgoing Racing Point driver Sergio Perez.

The top three qualifiers, Verstappen, Valtteri Bottas and Lewis Hamilton, will start medium tyres, while Albon made a mistake on his medium run in Q2 and will start on softs instead.

“Yeah, that’s the goal,” said Albon when if asked the plan was to help the Dutchman take on the Mercedes drivers.

“Obviously, it’s a bit of a shame because I ran a bit wide on my medium tyre run.

“And we didn’t want to take the risk to run the mediums again, for Q2 run two, so we put the softs on, which isn’t ideal, because the deg is quite high here. So that first stint might be a little bit difficult.

“But the plan is to stay close, and to be there in the mix. We’ve got Lando [Norris] in between us. He did a very good lap, actually, so we’ll have to be mindful of that.

“And of course, the McLarens are around me, and they’re the best starters on the grid. So we’ll focus on a good launch and trying to be in there and trying to disturb the Mercedes strategy.” 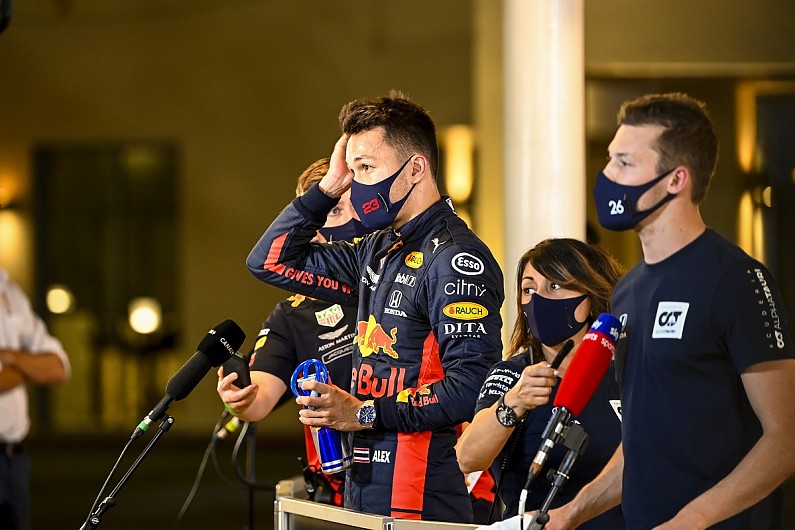 Albon felt that he has made progress in understanding the RB16, but admits he won’t know about his future immediately after the race.

“On my side it’s just more about doing the best job I can right now, and having a good day today is obviously positive,” he said.

“Of course I would have wanted to be a bit better, but I’ve still got tomorrow to do a good job.

“At least on see my side it’s more about doing the best job I can, and making sure I’ve done everything that is in my control to get the seat for next year.

“I mean, truthfully, [the timing] doesn’t change too much. Because firstly, I’ve been in this position many a time, not knowing what I’m gonna do at this time of the year. But also it doesn’t change how I go into the race.

“Of course, it would be nice to know. But it is the holidays after this. So obviously with family, and there’s no more races coming up after this one. So I won’t be constantly thinking about it, I’ll be eating turkey.”