Nasser Al-Attiyah is focusing on the fifth and sixth stages of the Dakar Rally which he feels will be vital to his victory hopes after a second successive stage win.

The Toyota driver slashed the time deficit to overall leader Stephane Peterhansel to 5m09s by taking a second straight stage victory on Tuesday’s third stage of the Dakar Rally, as he aims to recover the 12 minutes he lost on the leaders on the opening stage on Sunday.

With the three-time Dakar winner having already planned an all-out attack “from day one”, Al-Attiyah has picked out the upcoming fifth and sixth stages as “key” opportunities to build the foundations for his charge after tomorrow’s fourth stage.

“This is a sprint race so our strategy was to push even if we were opening the track. We knew it was going to be more difficult in terms of navigation, but we have to dare, because when you open, not always you lose,” Al-Attiyah said on his arrival at the bivouac of Wadi Ad-Dawasir.

“To open and to win the stage feels really good.

“Tomorrow we will open again. On paper, the fourth stage should feature more fast tracks and hard terrain so it should be easier in terms of navigation.

“We want to finish in a good position to tackle two key stages for this 2021 Dakar: the fifth and sixth stages. So we need still to understand which strategy we will adopt.

“Dakar is a long race. There are some days where everything works well as today. I was comfortable with my pace.

“Opening the way without the tracks of the others in the end it turned to be an advantage, as we were completely focused on ourselves and we proceeded with confidence. Yes, there was a moment where we got a bit lost, but we didn’t lose too much.” 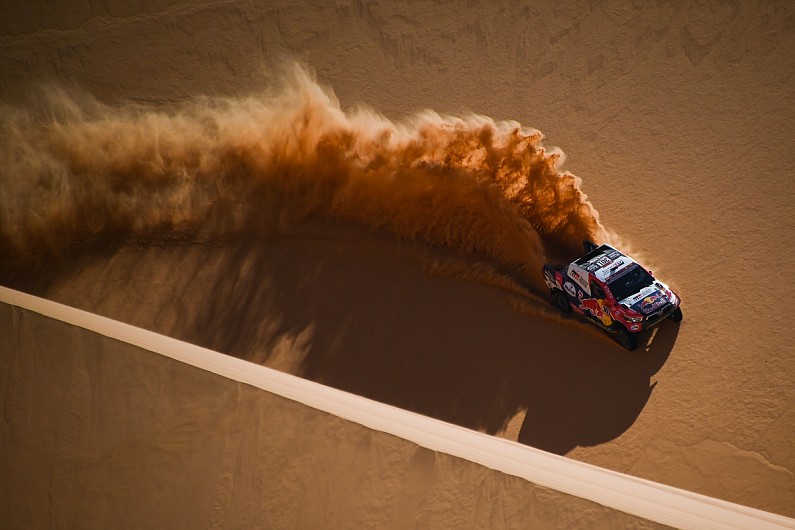 While Al-Attiyah says he continued to be in “push mode” to close up the deficit to Peterhansel, taking over four minutes out of the X-Raid Mini driver’s overall lead, he did concede he is driving within his limits to avoid unnecessary risks depending on the terrain.

“After yesterday’s good feeling with the machine and the terrain, the idea today was to try and gain as much as possible,” he said.

“We attacked from the start and were on the ‘push mode’. I was really happy with my pace.

“You cannot really push to the limits, because when you open the way it would be too easy make mistake. The winning key is to understand when you can push and when you have to manage according to the terrain.

“It was not an easy day. There was a strong wind so we could not see the tracks of the bike, but I trusted Matthieu [Baumel], my co-driver.

“He did a great job with the navigation. Today the terrain was varied but also with sand dunes so the priority was not to remain stuck. We used our experience and intuition reading the terrain mile after mile.”