Toyota driver Nasser Al-Attiyah closed the gap to his X-raid Mini rival Stephane Peterhansel with a victory in the eighth stage of the Dakar Rally.

Having slipped nearly eight minutes behind Peterhansel with a subdued showing in the first part of the marathon stage, Al-Attiyah brought the deficit back under five minutes with his fourth stage win of the 2021 event in the 375km loop between Sakaka and Neom on Monday.

Starting fourth on the road, the three-time champion immediately grabbed the lead at the first waypoint from Carlos Sainz Sr and Sunday’s stage winner Yazeed Al-Rajhi, with Peterhansel sitting 30 seconds behind in fourth place.

Peterhansel managed to snatch the lead from Al-Attiyah by Waypoint 4, but the Qatari driver never slipped more than 20 seconds behind the 13-time winner and reclaimed top spot just two checkpoints later.

Once back in front, the Toyota driver steadily extended his advantage, eventually winning the stage by just under a minute from defending champion and X-raid driver Sainz, with Peterhansel eventually finishing 3m03s down in third.

With Al-Rajhi encountering mechanical problems later in the stage, Jakub Przygonski assumed the mantle of the top Overdrive Toyota driver, narrowly beating the factory-run Yaris of Shameer Variawa to sixth. 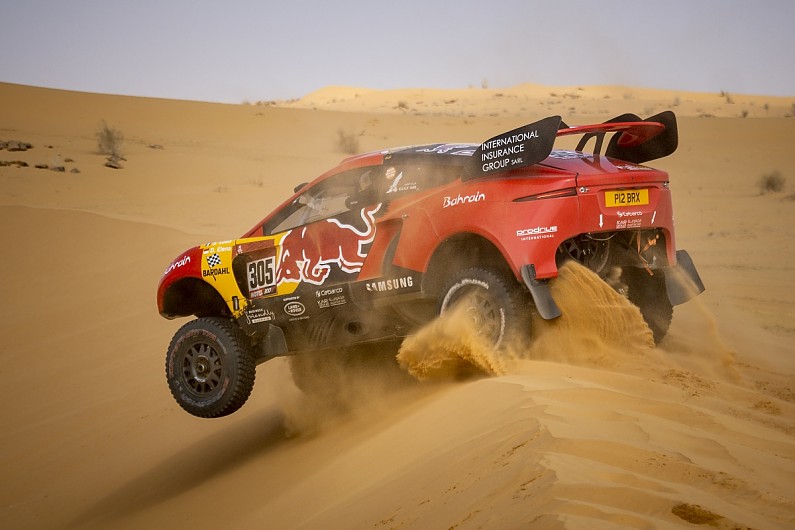 Rally legend Sebastien Loeb’s run of misfortune continued on Monday as he was forced to stop twice in the first 40km, the second time due to a lack of spare tyres after his Prodrive-run BRX1 contender suffered two punctures.

With the two-part marathon stage complete, Peterhansel leads the overall standings by a reduced margin of 4m50s from Al-Attiyah, with the French driver’s team-mate Sainz now 38m55 behind in third.

Przygonski sits comfortably in fourth from Roma, who is likewise well clear of Vasilyev and Al Qassimi. Red Bull been through “pain” of F1 cost cap redundancies